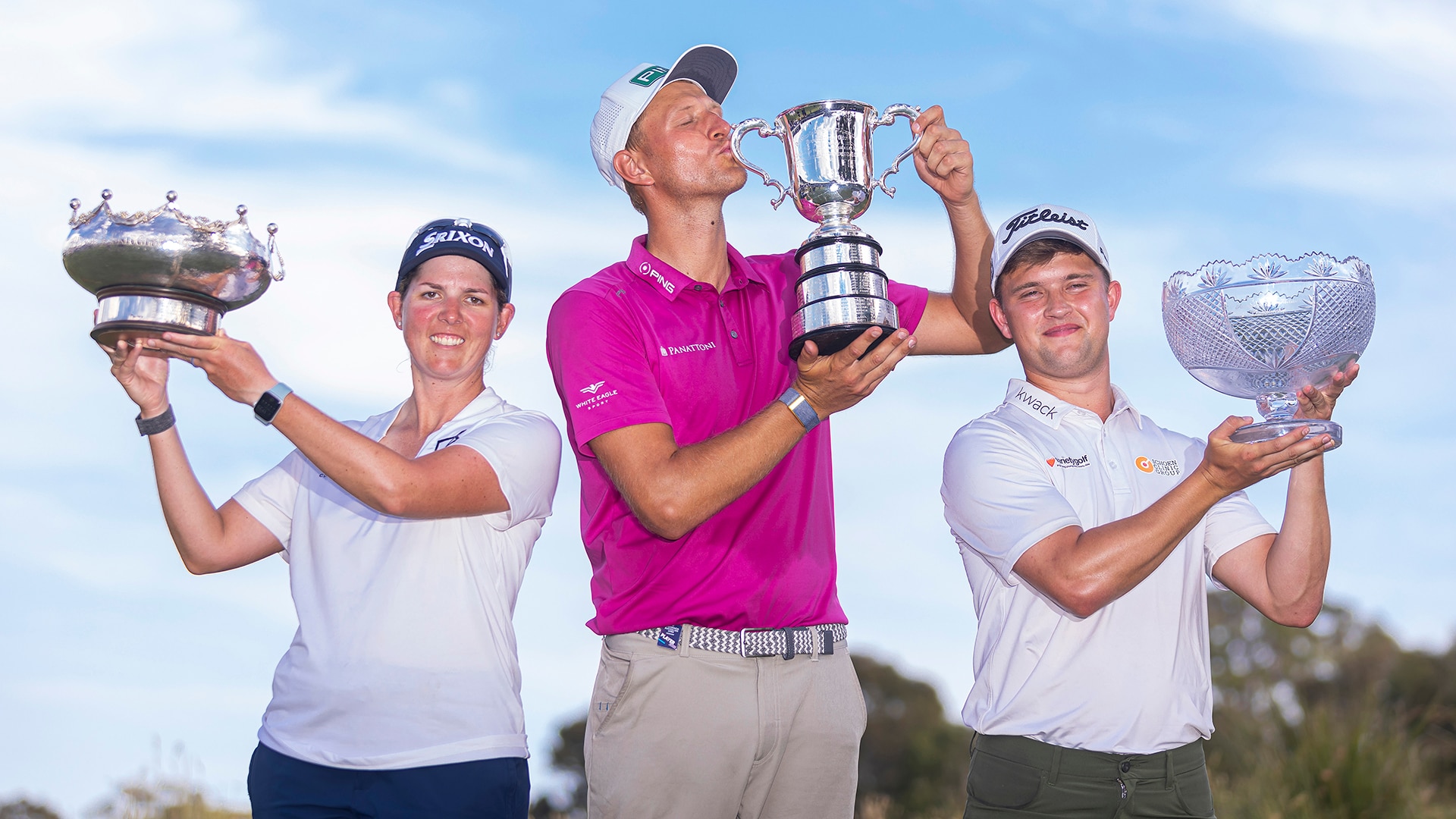 MELBOURNE, Australia — A superb 12-meter putt off the back of the last green for eagle was Adrian Meronk’s spectacular signature to his Australian Open triumph at Victoria Golf Club.

Meronk, allowed the luxury of strolling down the last hole with a three-shot lead, stretched the winning advantage to five shots to cap a superb 4-under 66 on Sunday.

It completed a relaxing week for Poland’s first winner as he stayed with relatives of his partner nearby and was able to walk to the course each day to shoot 73-66-63-66 to become the first European to win the title since Rory McIlroy in 2013.

Meronk, who broke through with his Irish Open victory this year, was too steady for Australian playing partners Adam Scott and Min Woo Lee. Scott finished second at 9 under with Lee another shot back in third place.

West Australian Haydn Barron similarly holed a monster putt for eagle at the last to share fourth place with Spain’s Alejandro Canizares at 7 under.

“I’m super excited and to finish like that on the 18th hole is just unreal. I’m so grateful, thank you for all the support and I enjoyed this week so much,” Meronk said.

“I felt really good again today. I kept doing what I’ve done the last two days and it worked pretty well. I’m super proud of myself, proud of my team and super happy right now.”

Buhai tapped in for par after watching Shin’s birdie attempt to force a play-off miss to the right of the cup and she added the title to her Women’s Open crown with a 12-under total.

It was a double family celebration for Buhai with husband Dave serving as her caddy. And also compensation after he couldn’t carry the bag during her British Open victory.

“It’s the cherry on the top I guess. And obviously last minute, to have Dave on the bag, it’s very special to be able to celebrate together,” Buhai said.

“He was good today. It was a bit easier for him being inside the ropes than outside the ropes. You’re a little bit more in control. Got lots of friends and family here, it’s very cool.”

Shin edged out Australian Hannah Green by one shot for second place with Kim fourth at 9 under, one ahead of another Australian Minjee Lee.

Buhai was seemingly in control for most of the final day but she left the door ajar with dropped shots at the 10th and 14th and it was young Kim who emerged as her biggest threat.

Kim, playing in the group ahead, birdied the 15th to sneak within a shot of the lead. But, after finding a greenside bunker in two at the 17th, she left the third shot in the sand and had to settle for par.

Kim and Buhai were tied for the lead after the South African made a mess of the long par-3 16th, but she still had two par-fives to finish.

And the Australian’s charge slipped further after she found tree trouble at the short par-5 last hole and had to settle for a disastrous double bogey.

Shin was seemingly out of contention at 5-over par after 13 holes. But she made her move with birdies at 15 and 17 and then watched that crucial birdie attempt from two meters slide past the cup at the 18th.

Meronk was rock-steady after grabbing the lead with birdies at the first two holes in stark contrast to his Australian playing companions.

Scott made his move on the back nine with a three-meter birdie putt at the 12th to cut the lead to two and then scrambled a par at the next after missing the green with his approach shot.

Meronk’s only mistake came at the 13th when a punched approach shot from light rough found a greenside bunker and he failed to get up and down for par.

But he immediately bounced back with a birdie at the next hole to restore a two-shot buffer to Scott.

The Australian’s quest for another national title to match his 2009 victory ended when he pushed his drive right at the 17th hole. It forced him to use a provisional ball, signing for a double bogey and allowing Meronk to make a stress-free walk down the 18th hole.