As it helps community rebuild, Florida Gulf Coast plays on 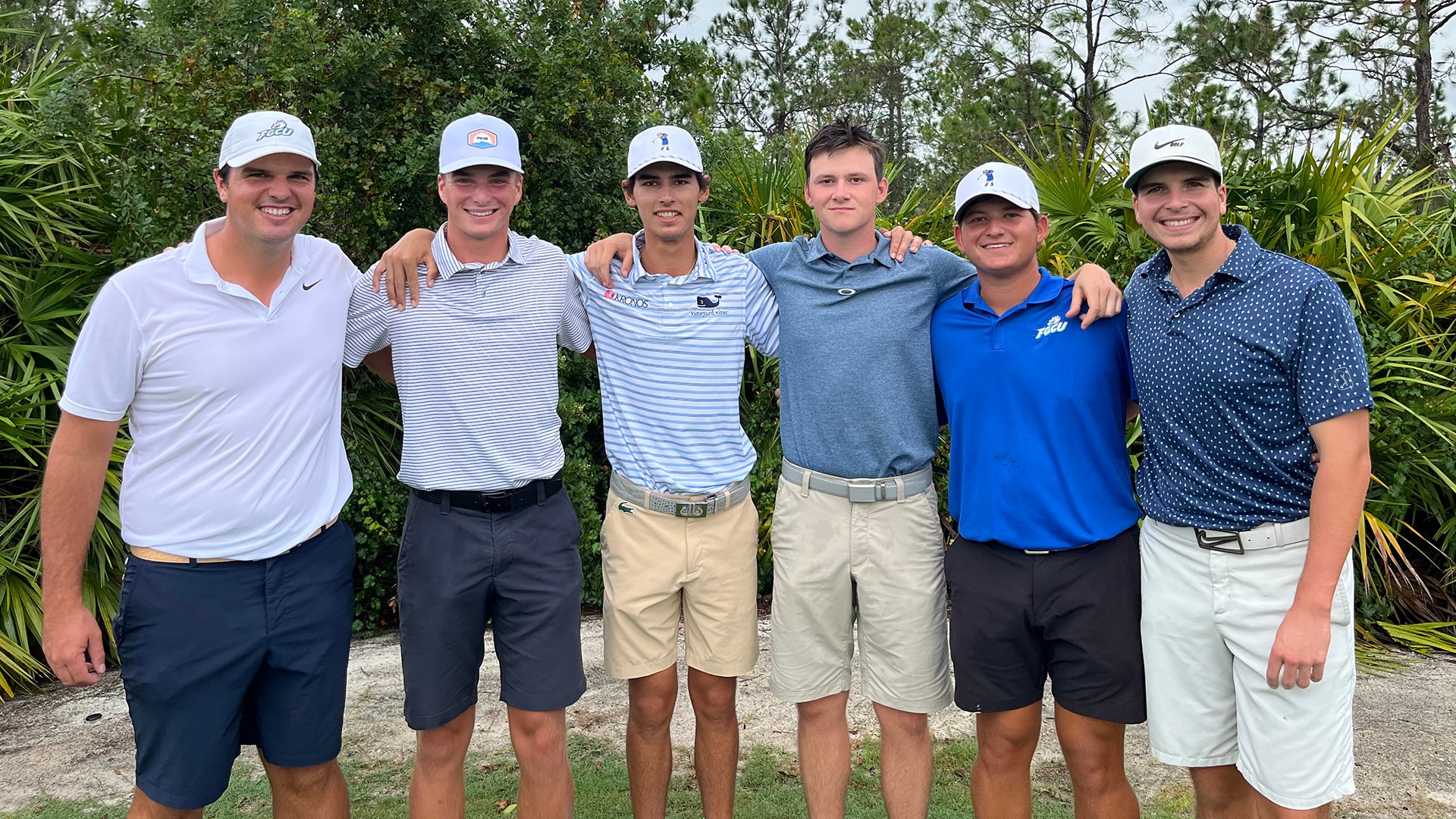 Austin Cherichella’s task was simple: throw everything away.

The junior from Orlando, Florida, and the rest of his Florida Gulf Coast teammates and coaches put their clubs away for a few days last week to help their community clean up after Hurricane Ian devastated the Fort Myers area. With storm surge and flood waters rushing through coastal neighborhoods, homes that weren’t lifted off their foundations were filled with saltwater, destroying most, if not all, of what was inside.

“So many pictures,” Cherichella described of the homes in the Pine Island area, where he was volunteering. “We were taking carpets out, throwing doors out. … They were saying just take everything out of the houses and put it on the curb. It was really devastating to see.”

Eagles head coach Andrew Danna recalls one elderly man they helped. He was about to turn 94 years old and had decided to ride out the storm alone in his home.

“He told us how the water had gotten up to his neck and it was a scary situation,” Danna said, “and then the water came down and he was able to sit in his recliner in the water and just kind of wait. And he ended up being OK, God willing and thankfully.

“There are countless stories of that.”

The Category 4 storm made landfall on Sept. 28 near Cayo Costa, putting Fort Myers to the south and its barrier islands such as Fort Myers Beach, Sanibel Island, Captiva Island and Pine Island on what people call the dirty side of the storm, which slammed the coast with 150 mph winds, fourth fastest among storms that have made landfall in Florida, and up to 18 feet of storm surge. Of the over 100 deaths recorded so far, officials say half are from drowning.

“The flooding was just horrific,” Danna said. “That was … yeah. I mean, you saw the pictures.”

As one can imagine, it’s hard to find words. Danna attended college at Mississippi State, worked as a PGA pro in Louisiana and has coached college golf in the Sunshine State for over a decade, including at Division-II Lynn University, where he won a national championship in 2018. So, he’s familiar with hurricanes.

But nothing could’ve prepared he and his team for Ian’s impact.

As Ian barreled through the Caribbean and toward the Gulf of Mexico, it was unclear what path the storm would take. Some models took the hurricane parallel to Florida’s west coast before hitting the Panhandle.

Based on the data at the time, Danna figured his team would be able to fly to Winston-Salem, North Carolina, for the Sept. 26-27 Old Town Invitational, hosted by Wake Forest, and then safely return to campus in Estero, Florida, before the hurricane conditions arrived.

“Obviously, forecasts with hurricanes are unpredictable. … and so, we’re there, and at one point we’re like, ‘OK, we’re probably not flying back into Fort Myers,’” said Danna, who during the final round was able to change his team’s flight, rerouting the Eagles to Miami, where they’d then drive the 140 miles or so home.

After a disappointing 10th-place showing, FGCU was able to get to Miami, but by the time they arrived, Danna deemed it unsafe to complete their journey back. So, he purchased some hotel rooms and the Eagles sheltered in place for two nights.

“It was difficult,” Danna said. “My wife’s 9 months pregnant.”

Luckily for Danna, his in-laws and some neighbors were with his wife and 2-year-old daughter, and their neighborhood was inland enough as to not take the brunt of the storm.

By that Thursday afternoon, the Eagles were on I-75, following emergency crews who had been staying at their hotel in preparation to assist in post-hurricane recovery and relief efforts. They were all met by destruction. FGCU’s soccer complex sustained extensive damage, but overall, the campus fared well. Especially relative to the coast, where swaths of what were once homes and businesses were washed away. Doc Ford’s, a restaurant just before the bridge over to Fort Myers Beach where Danna used to take recruits, is among the structures reduced to basically nothing.

“We got home, and we basically went right to volunteering and helping clean up,” Danna said.

The athletic-department-wide effort to help those affected by Ian has been spearheaded by FGCU’s Eagles Council, which facilitates community service opportunities for athletes. The golf teams were among over 150 athletes and students who have spent the past two weeks doing whatever they can.

Delivering food, water and other items of need.

“Times like these are when everybody comes together,” Danna said. “We’re just trying to give these families, some that we know and many that we don’t know, a hot meal or do whatever we can to help out those people in our community who have lost everything.”

As for his players, Danna said he hopes this experience gives them a “sense of community,” and that volunteering and helping those in need draws them closer together while demonstrating that some things in life are more important than sport.

“It was eye-opening,” said junior Thomas Salanito, who grew up in Palm Harbor, about 150 miles north. “It was also sad, this was one storm that no one could’ve prepared for what happened, but to help out my community, it was an awesome thing.”

Added Cherichella: “It definitely put everything in a new light.”

In the days following the storm, golf was far from the Eagles’ minds, even with FGCU set to compete in the Bank of Tennessee Intercollegiate Oct. 9-11 in Jonesborough, Tennessee. They helped clean up debris littered across their two home clubs, West Bay Club and Old Corkscrew, but when it came to practicing, they did little of it – with both courses closed, the only option available to them was Panther Run Golf Club about 45 minutes away in Ave Maria.

“Logistically, we didn’t know if we were able to get to the event based on everything that’s going on,” Danna explained, “and then obviously seeing what had happened in our hometown and volunteering and everything, it was about trying to find that balance between helping others and us being in the middle of our season.

“Ultimately, we sent the guys up there.”

With Danna staying back in case his wife went into labor, assistant coach Austin Schultz, an FGCU alum, accompanied the Eagles to Tennessee. With the Fort Myers airport still closed, they caught a flight from Fort Lauderdale, north of Miami.

“Sometimes, honestly, it felt wrong going to play golf because some people don’t have homes anymore,” Cherichella said, “but it was nice to get away and get back to normalcy.”

With less-than-ideal preparation, the Eagles got off to a slow start, sitting 12th in the 15-team field after the first round. But two days later they rallied to a solo-fourth showing, besting some strong mid-major programs such as Georgia Southern, Charlotte and College of Charleston.

“I know it was a fourth-place finish,” Danna said, “but after everything we’ve been through, I thought that was pretty special.”

Since the tournament, the Eagles have tried to get back into their routine the best they can as they chase a second straight NCAA regional appearance – last season the Eagles earned the school’s first at-large postseason berth, in any sport. On Thursday, they were holding practice and intrasquad competitions at Old Corkscrew while Danna, still on baby watch, had one eye on his phone. But they were also planning on delivering meals over the weekend.

“We’re going to continue to do what we can to help our community,” Danna said.

That includes playing for it.

“I consider Southwest Florida my home,” Salanito said. “I’ve made a home here in Fort Myers, and I definitely carry this community with me, and now, more than ever, I want to play for them rather than just myself and our team.”