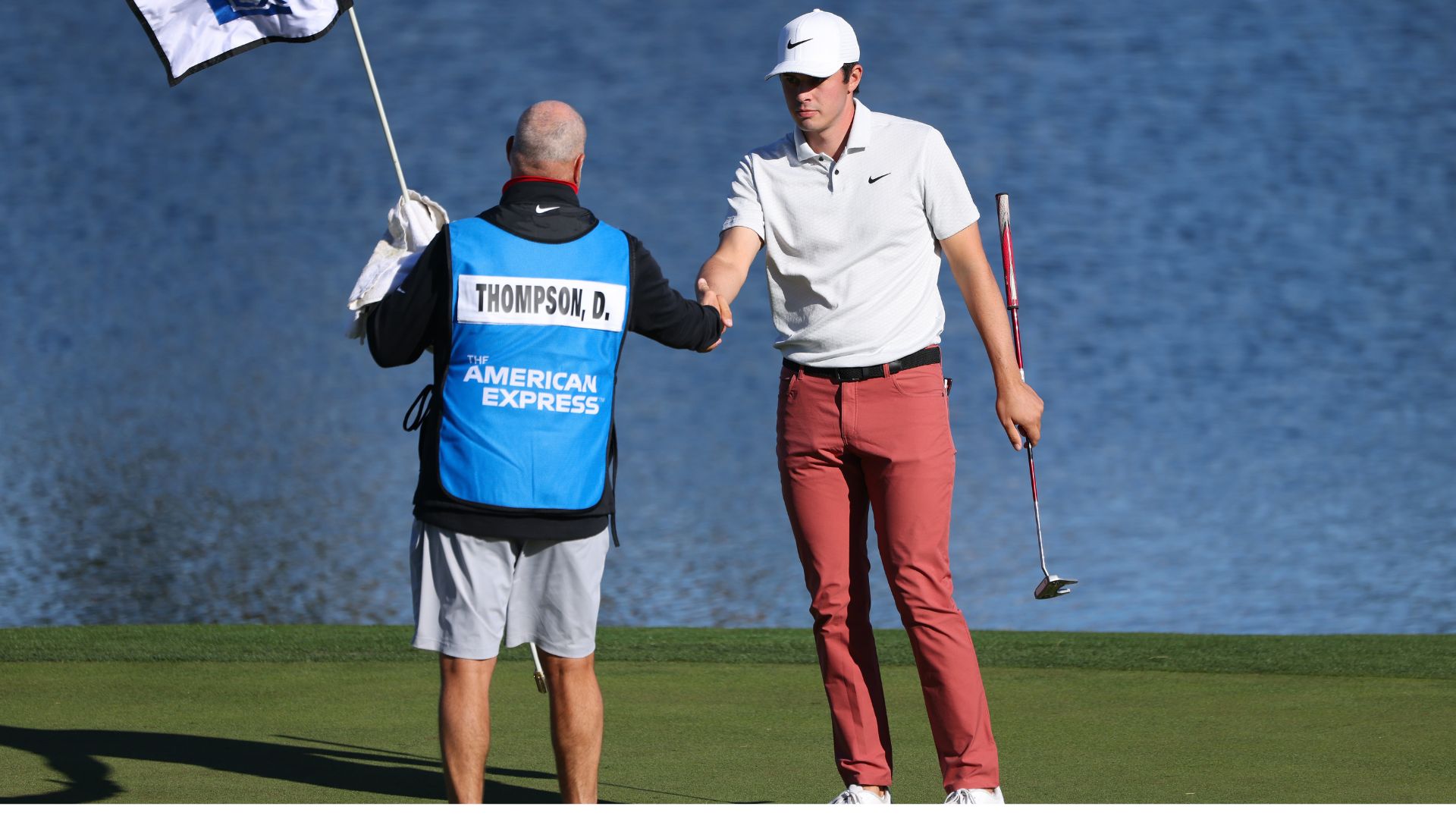 
LA QUINTA, Calif. — Rookie Davis Thompson made three more eagles Friday for a total of five through 36 holes to tie the PGA Tour record for the most in a 72-hole tournament since 1983, and he still didn’t put any more distance between himself and Jon Rahm at The American Express.

Thompson also carded his first bogeys of the tournament, which were hardly enough to slow him down. One day after making consecutive eagles in shooting 10-under 62 at La Quinta to take the first-round lead, Thompson carded an 8-under 64 on the Nicklaus Tournament Course at PGA West. He had three eagles, four birdies and two bogeys.

The 23-year-old who played college golf at Georgia was at 18-under 126, two strokes ahead of Rahm, who also shot 64 on the Nicklaus course.

“I just had some good numbers into par-5s and was able to execute my shots,” Thompson said. “I had some putts drop. So it was nice to make some eagles.”

“I think putting the ball in the fairway, hitting a lot of greens and really seeing lines well on my putts,” Thompson said. “Just everything is kind of clicking these last two days and I’m just looking forward to trying to keep it rolling tomorrow.”

Thompson will play the Stadium Course on Saturday, which will host the final round on Sunday after the 54-hole cut in this pro-am event, which uses three courses.

Thompson is the second player to have five eagles through two rounds at The American Express. He matched the record set in 1995 by Scott McCarron, who missed the 72-hole cut when it was a five-round tournament.

Thompson, who began his round wearing a hoodie in the early-morning chill, eagled his second hole, the par-5 11th, when he hit a 5-iron to about 15 feet. He then had two bogeys in four holes spanning the turn to briefly lose his lead, but then ran off a string of three birdies and two eagles in a span of five holes to go from 1-under to 8-under for his round. He eagled the par-5 fourth and the par-5 seventh — hitting the green with a mid-iron and draining a putt from roughly 20 feet each time — before finishing his round with consecutive pars.

Rahm, the world’s fourth-ranked player who won two weeks ago at Kapalua, matched his score from a day earlier at La Quinta.

“Feeling great. Lot of confidence,” Rahm said. “Having essentially the hardest course two days in a row, but I’m in a really good position. So hopefully I can keep the good game going.”

Five players were five shots back of Thompson, including 20-year-old Tom Kim, who had the low round of the day, a 10-under 62 on the Nicklaus Course, and Jason Day, who shot 64 on the Stadium Course. The others were J.T. Poston, Sungjae Im and Tyler Duncan.

The field includes five of the top seven players in the world and 10 of the top 20.

Second-ranked Scottie Scheffler and sixth-ranked Xander Schauffele were in a group of five at 11 under that also included Rose. No. 5 Patrick Cantlay was in a group of seven at 10 under while No. 7 Will Zalatoris was at 6 under.