↓ Skip to Main Content
Home › Blog › Devastated by DQ at Q-Series, Alana Uriell is determined to bounce back

Devastated by DQ at Q-Series, Alana Uriell is determined to bounce back 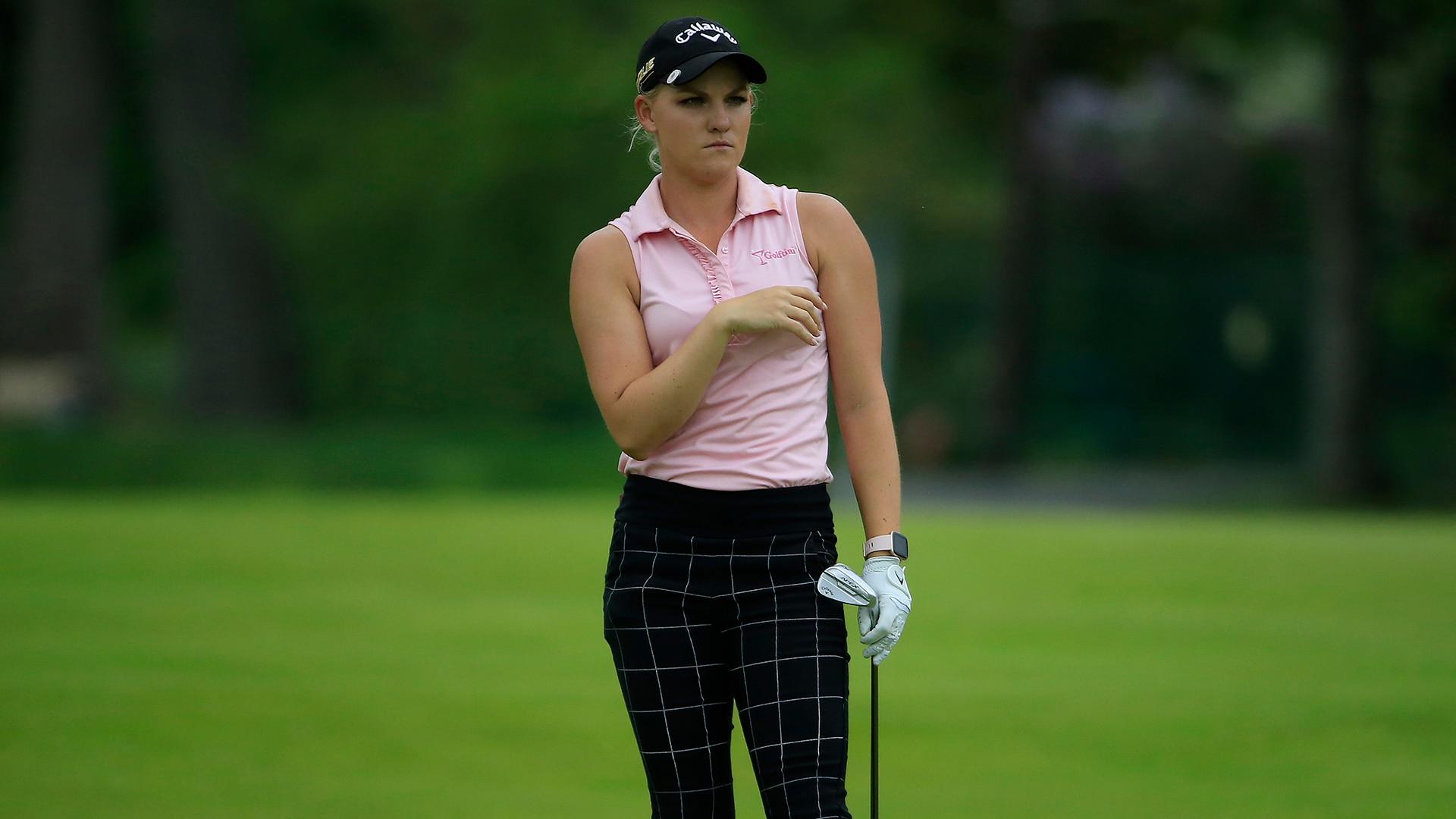 It had been an emotional 48 hours for Alana Uriell.

Two days earlier, the 26-year-old professional golfer had made the costliest mistake of her career, signing for an incorrect score and subsequently being disqualified from LPGA Q-Series after just two rounds. Now, she was tasked with making sense of it all.

“I’ve never done this before; I’ve never signed for a lower score and gotten disqualified,” she added. “I don’t think I’ve ever been disqualified. This is new … and terrible timing, too. It could’ve just been a normal LPGA event and I would be like, Well, I lost out on a week, but I can compete next week. This was a little more at stake, and that’s the part that really is the butt-kicker in all this.”

Uriell arrived last week in Mobile, Alabama, as a Q-Series veteran. She had passed the eight-round test in each of her previous three tries, including in 2018, just months after turning pro out of the University of Arkansas. This time, she had ended up No. 130 in the LPGA’s Race to the CME Globe and required a finish among the top 45 and ties at Q-Series to retain her LPGA card for a fifth straight season.

She opened the first half of the marathon qualifier last Thursday in even-par 72, using her short game to save her around Magnolia Grove’s Crossing Course, which was muddied by heavy rains in the lead-up to the event. That next morning, she unlocked something in her swing and started her second round on the Falls Course with three straight short-range birdies.

As she added a couple more birdies, not even her group being put on the clock on the 13th hole could derail Uriell – or so she thought. In an effort to pick up her pace, Uriell stopped writing down her scores for the last five holes, and when she finished her round, she quickly filled them in.

“I didn’t really think it through,” she admits.

One of the scores Uriell wrote down was a birdie at the par-4 14th hole. While going over hole-by-hole numbers in scoring, Uriell’s playing competitor had Uriell down for a par on No. 14, but after a quick discussion, Uriell’s opponent erased the ‘4’ and replaced it with a ‘3.’

Uriell walked out of scoring having signed for a 5-under 66.

“I was feeling good,” Uriell says. “I had given myself a bunch of putts for birdie, made a few of them, I was striping it.”

But later at lunch, the player who had kept Uriell’s score came up to Uriell and questioned her score on No. 14. Uriell had previously been convinced she had made birdie, but now she wasn’t so sure. She pulled out her yardage book and started recalling the hole.

“I’m looking at the strip of scorecard I had and I’m thinking, Why would I write down a birdie? What is happening?” Uriell recounted. “I sat there for a second and I was like, I actually messed this up, and I messed this up more than, Oh, just erase it and fix it. It’s so much more than that; it’s my whole year, all my status, all the consequences came through. … It was a hard pill to swallow.”

Uriell went back to scoring and self-reported the violation. She already understood what the penalty would be.

(Starting next year, tours will have the option to adopt a modern local rule that would instead implement a two-stroke penalty for such a violation.)

“I knew it was a DQ, and I knew that it killed my hopes and expectations and status for next year – for LPGA, at least – and I was devastated,” Uriell said. “I cried in the parking lot. I’m looking at my caddie and I’m like, ‘I’m so sorry. I know that we both worked really hard for this, and I messed it up in one second.’”

Instead of trying to back up a strong second round, Uriell was changing her flight and packing her bags. By Saturday afternoon, she was home in Carlsbad to start the healing process and lay the foundation for a potential comeback.

Uriell will still have conditional LPGA status – she’s hoping to get into four or five events on her number next season – and full Epson Tour membership. But for the first time as a pro, she will start the year without a permanent home on the LPGA.

She beamed when talking about her T-16 finish at last season’s JTBC Classic, held at her home course, Aviara Golf Club, and how she parlayed that finish into her first major start – and first major made cut – that next week at the Chevron Championship, a tournament she grew up attending.

Now, having taken a step back, she knew she’d have extra work to do, or as she called it, “a bigger mountain to climb,” to build on those experiences.

She’s ready to embrace that challenge – and do so confidently.

“Playing the Epson Tour is a great way to gain that confidence and compete against some still great players and see some shots under pressure and build trust in my game,” Uriell said. “I think that’s going to be the overarching theme for next year is even though I’m here [on Epson], I’m going to make the best of it.”

Uriell, who fully admits she’s her toughest critic, has appreciated those who have reached out to her the past two days, whether it’s family, friends or strangers on social media sending messages of encouragement.

“People have been sweet,” Uriell says.

One of the more impactful conversations she’s had was with her instructor of 14 years, Jason Puterbaugh, who told Uriell, “You’re a great player. You’ll have more opportunities in the future. Don’t let this bump in the road get you.”

As much as her disqualification stings right now, Uriell is comforted knowing that she’ll be better for it. She and her caddie plan on starting a checks-and-balances system when keeping her score, each logging their own record and then comparing the two before Uriell signs her card.

And she wouldn’t mind a little golf karma, either.

“It certainly helps ease the pain of the situation thinking that something good will come out of this,” Uriell said. “In terms of a cosmic sense, I hope there’s some kind of good swing that’s going to come by. Golf is all about respect and the honors system and being an upstanding person, I would like to think that maybe I won’t lip out a putt next time; maybe it will lip in.

“And even if I don’t get the best bounce, at least I know I was doing the right thing.”