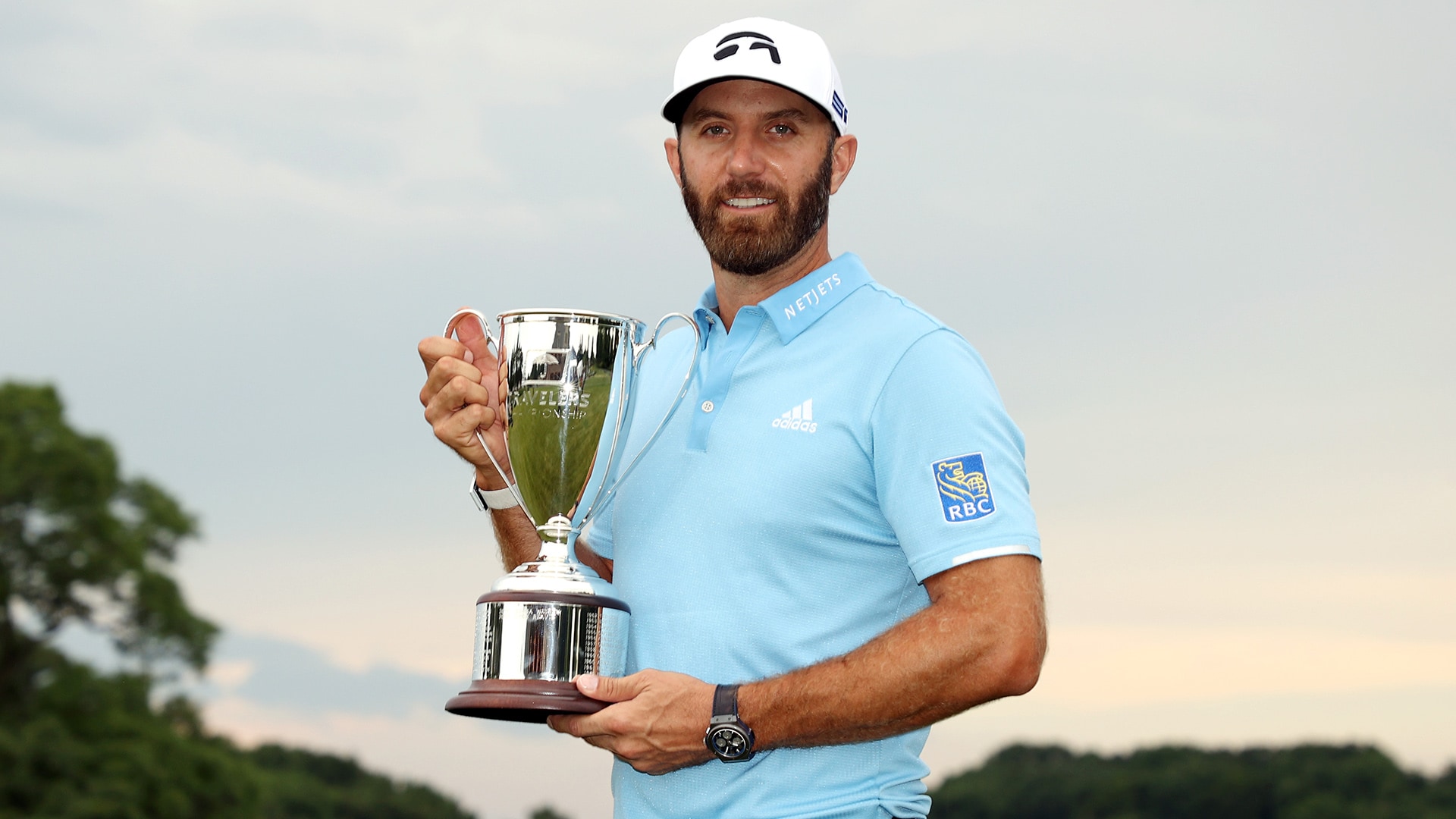 With a final-round 67, Dustin Johnson made it more interesting than he needed to but nonetheless added the Travelers Championship to his list of PGA Tour titles, winning by one over Kevin Streelman. Here’s how play wrapped up Sunday outside Hartford, where inclement weather halted play late in the round, delaying DJ’s eventual victory by an hour:

How it happened: Johnson quickly erased his two-shot deficit to start the round and staked himself to a two-shot lead of his own with three straight birdies at Nos. 8-10. He went up three over Streelman when Brendon Todd fell out of contention with a messy triple at 12. From there, what should have been an uneventful finish was anything but. Johnson promptly pulled his drive OB on 13, leading to a bogey. He bounced back and once again looked in control with a birdie at 14. But one errant tee ball later and DJ was taking off his shoes and socks to stand in the pond left of the 15th green so he could play his second shot from the bank, which miraculously stopped his ball from finding the water. Right after he managed to save his par, the horn blew at TPC River Highlands, halting play for 58 minutes, with DJ sitting on a two-shot lead with three to play.

Out of the break, Johnson finished bogey-par-par to win by one.

What it means: This is Johnson’s 21st PGA Tour title and his first in 16 months, since the WGC-Mexico last February. Following a runner-up finish to Brooks Koepka last May at the PGA Championship, DJ fell into what was by his standards a lengthy slump, recording just two top-10 finishes in 14 starts wrapped around arthroscopic knee surgery last September. This slump-busting victory in Connecticut gives Johnson his 13th consecutive season with a victory, extending the longest streak on Tour, one that dates back to his rookie campaign and very first win at the 2008 Turning Stone Resort Championship. Jack Nicklaus (1962-1978) and Arnold Palmer (1955-1971) share the record for the most consecutive seasons with a win to start a career on the PGA Tour, with 17.

Best of the rest: The 2014 winner, Streelman found himself just one back when he birdied 13 at just about the same time DJ went OB left at 12. But he could never pull even, finishing a Sunday 67 with five straight pars. This is Streelman’s fourth career runner-up finish, and second this year, after he finished behind only Nick Taylor at Pebble Beach.

Biggest disappointment: Up two to start the day, overnight leader Todd opened with 11 straight pars, and then his bogey-free streak – 61 holes dating back the early stages of his first round on Thursday – blew up in spectacular fashion. Todd tripled the par-4 12th, when he bladed his third shot over the green and then needed three more shots to find the putting surface before holing a 5-footer for his 7.

Two more bogeys and four more pars capped off a birdie-less 75, plummeting Todd to a nine-way tie for 11th, six back.

Special finish: With his final-round 64 and T-3 finish, Will Gordon racked up enough non-member FedExCup points to earn special temporary status on the PGA Tour. Playing this week on a sponsor’s exemption, Gordon, the 2019 SEC Player of the Year out of Vanderbilt, carded rounds of 66-62-71-64 to open up his playing options for the rest of the summer, as he is now allowed to accept an unlimited number of exemptions through the remainder of the season.

Shots of the day: Hughes buried these two birdie bombs at Nos. 17 and 18 to jump up a tie Gordon for third:

Quote of the day: “Obviously, it’s a great streak. Any time you’re mentioned with those names, it’s very good. I’m definitely proud of myself for continuing the streak, and I want to keep it going, but it was a long time between wins. Hopefully, it won’t be that long before the next one.” – Johnson