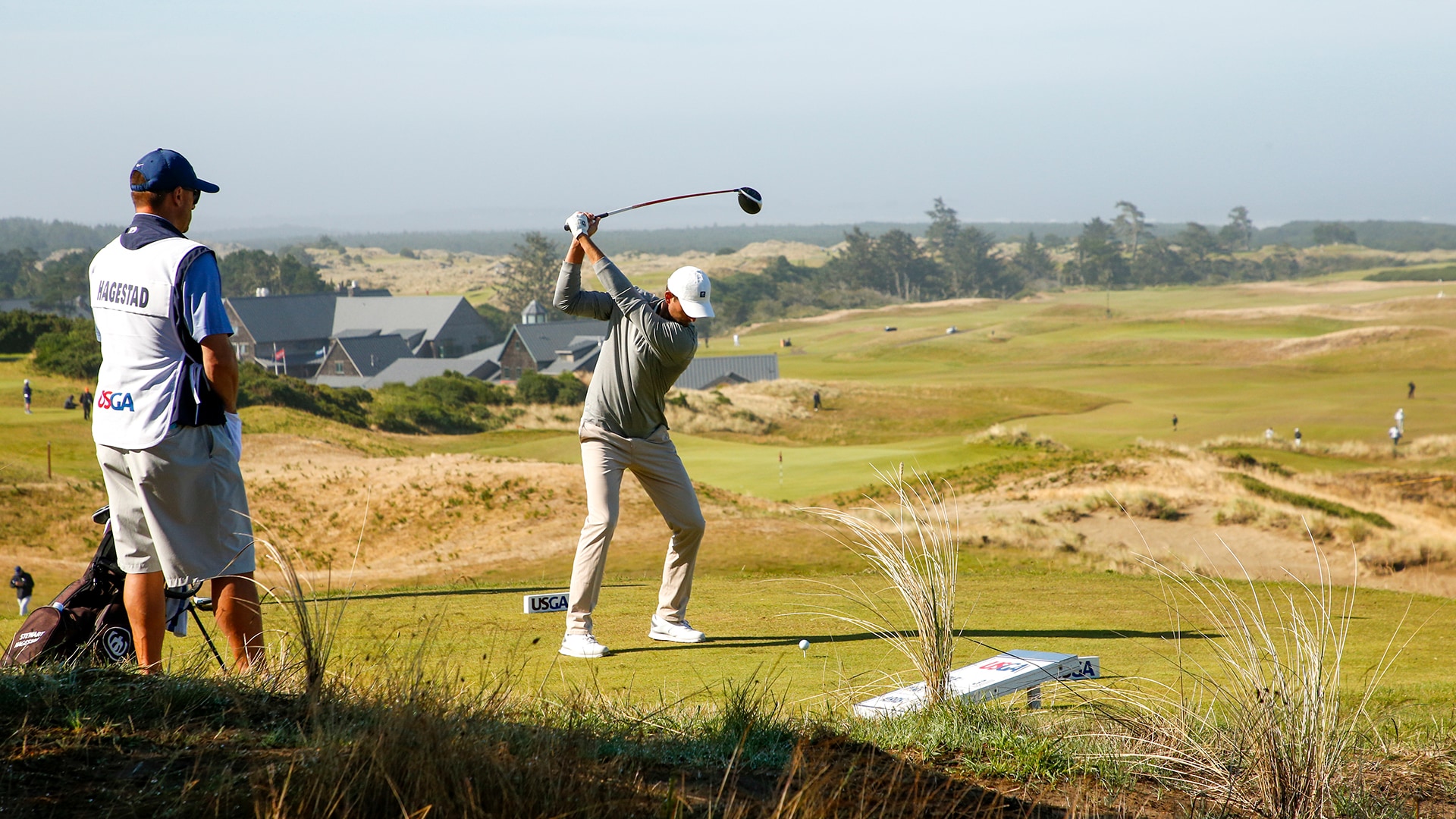 BANDON, Ore. – Stewart Hagestad is in the final year of his 20s. He’s played in 20 USGA championships, half of them U.S. Amateurs, and qualified for each of the past three U.S. Opens. He won the U.S. Mid-Amateur in 2016, took low-amateur honors the following spring at the Masters and has been on two winning Walker Cup teams.

Most 18-year-olds playing in their first U.S. Amateur would be understandably intimidated drawing the decorated mid-amateur in match play.

“I don’t want this in any way to come off as arrogant, but if I at 18 years of age played a two-time Walker Cupper that had played in a few majors, I’d be terrified,” Hagestad said. “I’d be 3 down on the first tee.”

And after one drive – a quick hook off the first tee box Wednesday at Bandon Dunes – Argentina’s Abel Gallegos appeared to be in for a long day. However, the powerful teenager quickly went off script, fighting back for an opening par, birdieing the next hole and building a 2-up lead through 11 holes.

For much of the day, Gallegos, the reigning Latin America Amateur champion, played well beyond his years, matching Hagestad shot for shot down the stretch. With Gallegos clinging to a 1-up lead and needing to get up and down at the par-5 13th to halve, he stuck a wedge close. When Hagestad hit a beautiful cut to 20 feet at the difficult par-3 15th, Gallegos put one inside of him.

“He just wouldn’t go away,” said Hagestad, who was taken down in last year’s first round by another teenager, Maxwell Moldovan. “But I wasn’t too stressed out. I knew that I had to execute and to continue hitting good shots. … I’m not going to pull the Brooks Koepka experience card, but I’m more comfortable now than I maybe would have been in years prior.”

Eventually, experience got the better of youth. After Gallegos left himself a 10-footer up the hill from just off the green at the penultimate hole, Hagestad, with the wind blowing hard off the left, stuffed his approach from just inside 120 yards and headed to the par-5 finishing hole tied.

Hagestad then yanked his tee ball into a poor lie in the left rough, but the kid couldn’t catch a break. Gallegos’ drive ran too far and into an even worse lie in the rough just in front of the right cluster of fairways bunkers. He got free relief from a sprinkler head and was able drop his ball in the fairway, leaving him about 250 yards into the wind.

The confident teen pulled out a long-iron and the ball came out low – too low.

It hit the lip of the bunker in front of him, ricocheted up into the air and ended up some 40 yards ahead in another thick lie. From there, he hacked one down the fairway, failed to wedge his fifth shot close and eventually conceded a short birdie putt to Hagestad.

“I won’t swear, but it sucks,” Hagestad said. “Like you’ve been there before. I’ve been in the playoff. I’ve had matches where I felt like I played great and lost or was leading the whole way or whatever. I’ve obviously been on the opposite side of it. But to be where he is, at 18 years old, like in the U.S. Am … he’s only going to continue to get better. It sucks in the moment. It’s terrible, and it’s a total bummer. I feel for him as an older person. But he’s only going to get better from it.”

While Gallegos is going home, Hagestad will move on to Thursday morning’s Round of 32, where he’ll face Oregon State’s Spencer Tibbits, who has tons of experience around this layout.

After his win, Hagestad planned to get some lunch, practice a little and relax, much like the rest of these young kids here this week. Except he also has some emails to send. Hagestad is supposed to have mandatory orientation for his M.B.A. program at USC on Wednesday, and, well, he has a bit of a conflict.

There are disadvantages of getting older.