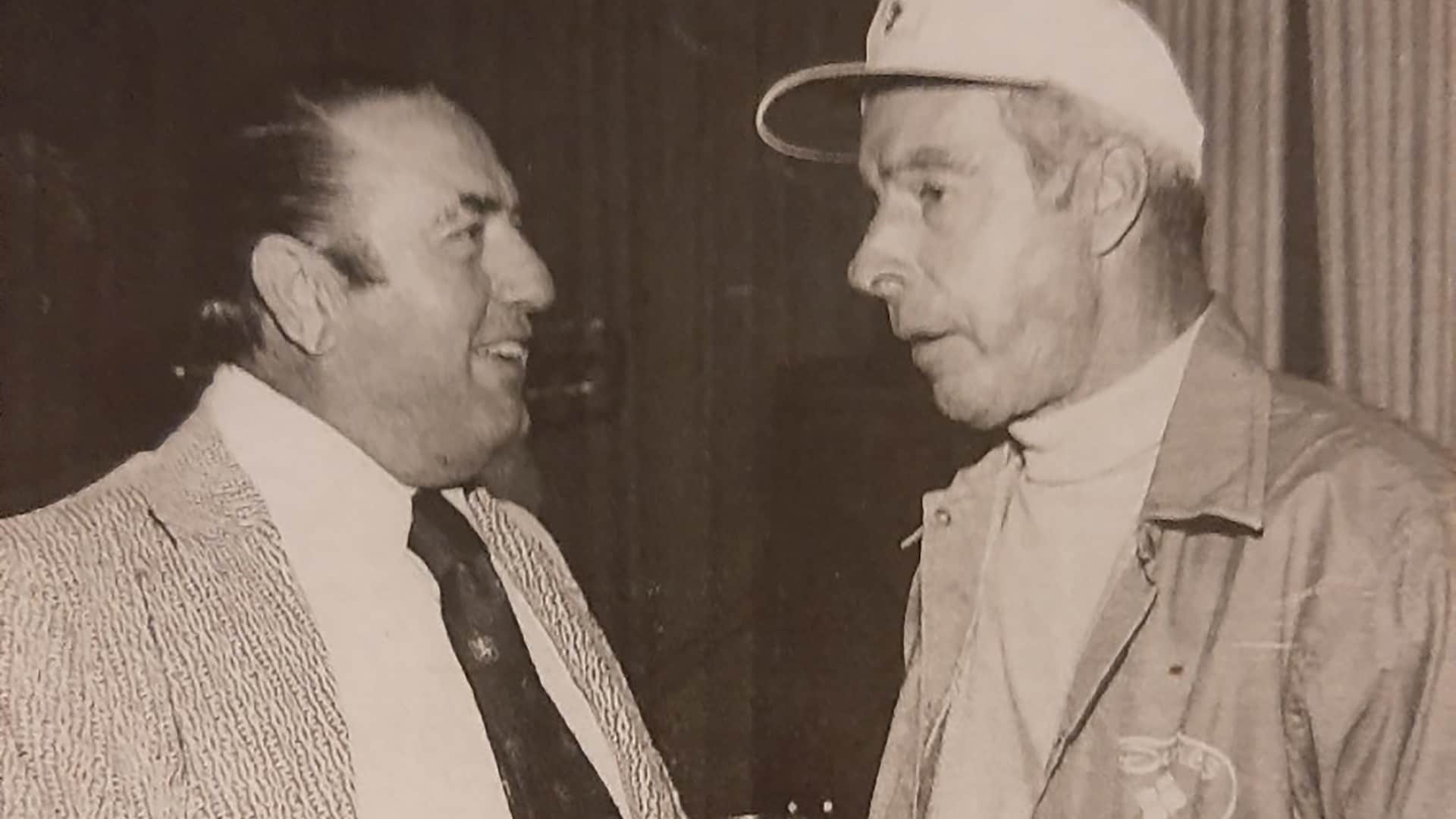 
The pause the coronavirus pandemic is bringing to our lives has made us retrospective, especially in athletics, with so many of our favorite sports channels turning back the clock to revisit historic games, athletes and characters. We’re doing it here, too, in our “Forgotten Figures” series. It’s a look back at players, events and even eras that are slipping further and further from the game’s memory …

Martin “The Fat Man” Stanovich didn’t look like he could play a lick.

He was squatty, with a barrel chest, a bulging belly and dray-horse thighs.

He looked so unathletic, and so did his unorthodox swing.

“It certainly wasn’t a swing you wanted to copy,” the late Ken Venturi once told this writer. “It was a crazy swing, and I don’t think you’ll ever see a swing like it again.”

Stanovich lunged at the ball like a man trying to kill a cockroach with a crowbar. That’s how author Tom LeCompte described the Fat Man’s swing in his biography of Bobby Riggs.

I heard a lot of stories about Stanovich back when I was the golf writer at the Sun-Sentinel in South Florida, where Stanovich made his home before dying of cancer of the spine in 1991. I heard that though the Fat Man never played the PGA Tour, he beat a lot of pros and won a lot of money. I heard he did this even though he was, technically, an amateur, before the USGA stripped him of his amateur status and then later reinstated him.

The pros of that era backed many of the colorful but mostly unwritten Fat Man tales I was hearing.

Doug Ford, Bob Toski and Al Besselink were all PGA Tour winners and all crossed paths with Stanovich in the ‘50s and ‘60s.

“The Fat Man wouldn’t shoot real low,” Besselink said. “He wouldn’t shoot 65 or 66 very often, but he had the greatest nerves and guts you ever saw in your life. He could shoot 69 or 70 every time, no matter the pressure. That’s something. When you’re playing for big money, it’s a different game.”

And that was Stanovich’s game.

The Fat Man might not have been a household name to golf fans in the ‘50s and ‘60s, but he was a legend in his circles. He was one of the last of his breed of hustlers, following in a line of colorfully nicknamed players, like Titanic Thompson, Amarillo Slim and guys named Charlie the Blade, the Whiskey Drinker and Three-Iron Ward.

“I steered away from him,” Ford, the winner of the 1955 PGA Championship and ’57 Masters, told me before he passed. “He was one of the better hustlers.”

“The Fat Man wanted the best of the game before you started,” Ford said. “That’s the way most hustlers are.”

Stanovich beat Ed Furgol, the ’54 U.S. Open champion, in three $1,000 matches in the early ‘60s, at Miami Shores Country Club, Furgol’s home course. Furgol gave him one shot per side.

Stanovich also once beat the legendary Tommy Armour, the three-time major champion from Scotland, who had settled in Delray Beach, Florida.

“Imagine him invading the sanctum of the Great Armour,” Armour once told Life Magazine.

“My dad considered himself a gambler, not a hustler,” says his son, Martin Stanovich Jr., who still lives in South Florida, as does his brother, Paul. “He loved to gamble.”

That’s why the Fat Man never tried to play the PGA Tour. He told his sons he didn’t want to take a pay cut. An average PGA Tour pro was lucky to make $20,000 in a year in Tour winnings in the ’50s. Stanovich told his boys he could make that in a good week on his own.

Stanovich’s unathletic look and unorthodox swing helped him find action, especially when he explored new regions, in a time where social media didn’t connect everyone so easily. His swing was a comical short chop, with all his weight ending up on his back foot, and with his front foot often ending up in the air. He was easy to bet against, harder to beat.

But people liked the Fat Man and his charms.

“He dressed nicely, was polite, was fun to be around and was good to the people he played against,” Besselink said. “They were almost happy to lose money to him.”

Stanovich didn’t go to school beyond ninth grade, but he was articulate, savvy and warmed quickly to people. He built a pair of mattress businesses in San Francisco and a small construction company in Chicago. He played golf with Bing Crosby, Jackie Gleason, Joe DiMaggio and Joe Louis. He was pals with comedian Buddy Hackett. He hung with Dean Martin and the Rat Pack when he was in Las Vegas. He was the preferred partner to mobster Jackie Cerrone in regular games at Chicago’s Tam O’Shanter Club.

Venturi and Lee Trevino used to team with the Fat Man in money matches.

I called Knievel back in 2007, when he was being treated for an incurable lung condition. The malady would kill him a few months later. He could barely breathe when he came to the phone, but he said he really wanted to talk about Stanovich.

“Stan was like a father to me,” Knievel said. “He played some of the greatest players in the world, and they all liked him.”

Knievel, a 4-handicap at his best, said they teamed in a lot of tough, high-stakes matches, some against questionable characters.

“We played a lot together in Las Vegas where there were some low, no-good rattlesnake thieving thieves,” Knievel said. “He taught me every trick in the book, every trick all those thieves out there could use against me.

“Did you know if you rub a little film of Vaseline on your club face, your ball won’t spin as much and you’ll hit it straight as an arrow? He taught me that. He taught me to watch out for the guys who pick up their ball to mark it and then flip the penny they’re using as their marker two or three feet closer to the hole.”

“Marty and I lost some matches,” he said, “but it didn’t compare to what we won.”

Winning matches wasn’t Stanovich’s problem, but he had a difficult time holding on to money. He was, after all, a gambler at heart.

Gambling was in the Fat Man’s blood. His older brother ran a gambling house in Biloxi, Mississippi, where they grew up.

There were stories mobsters once broke Stanovich’s hands over gambling debts, but Martin Jr. said his father told him those stories weren’t true.

At 76, the Fat Man didn’t die penniless, but he left a small fortune at racetracks around the country.

“My father was an amiable, pleasant man,” said Laurie Bross, his daughter. “He didn’t drink, didn’t smoke and I never heard him swear, though my husband said he swore like a trooper, just never in front of women or children. And even though he was from the South, I never heard him make a racial remark in my life.

“He could mix in with anyone. He had a way with people, a way of listening and making people feel special.”

And a winning history in a bygone way of the golfing life.