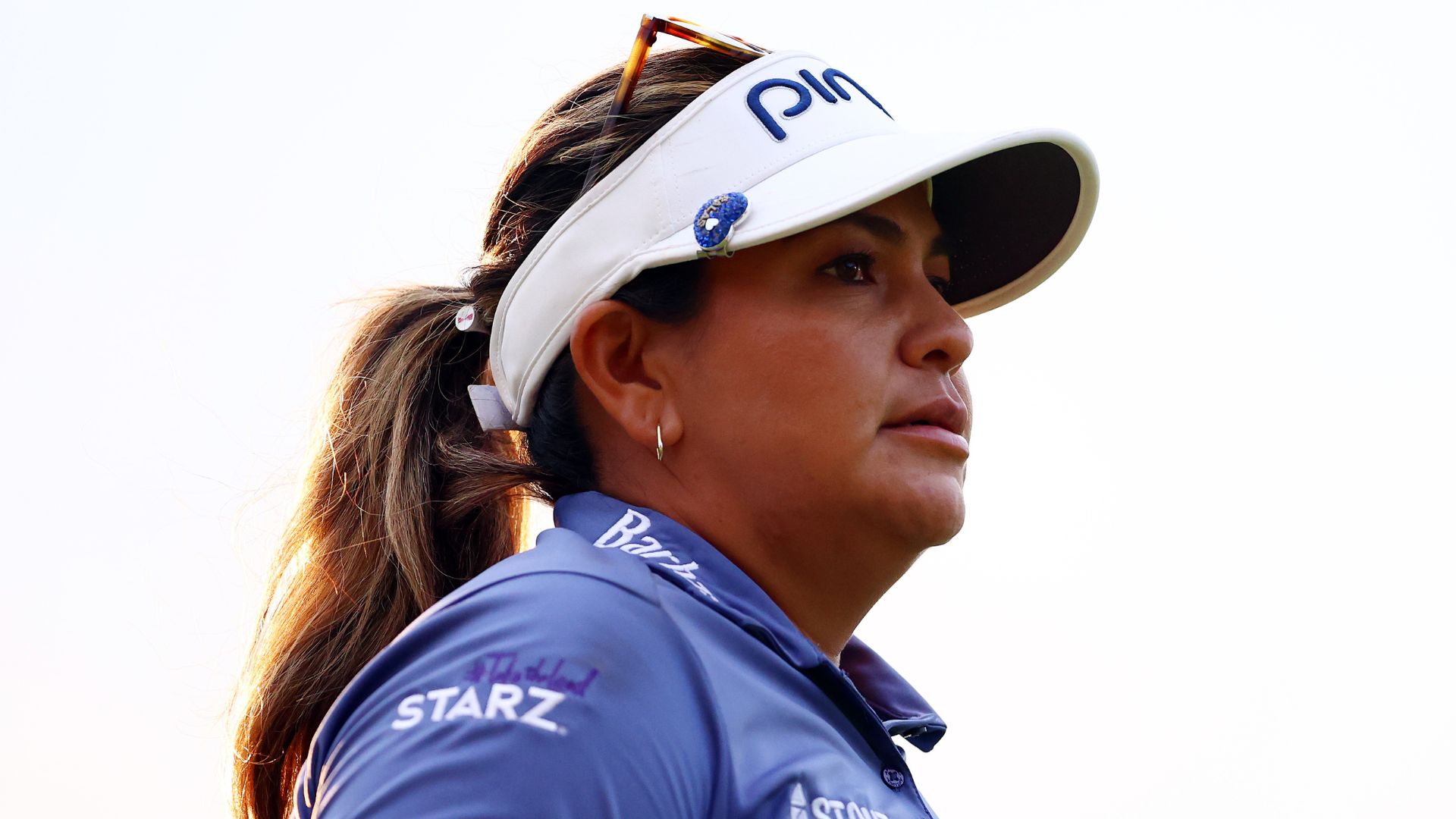 
Nestled under the dusty San Gabriel mountains, the Latino community of Azusa, California, bakes in the heat of a record-hot summer.

Slender palm trees sway above sleepy businesses on main street, only 25 miles East of Los Angeles — yet there’s hardly a feel of hustle or luxury here.

I’m in town to meet the local golf hero. But before I head to her home, I drive through the neighborhood streets, trying to get a sense of the place.

It’s clear that in contrast to those who move to Hollywood in hopes of becoming the next big star, Azusa beckons a different type of dreamer: the immigrant dreamer.

I make my way up into the hills outside town where each passing home seems to get larger.

Near the top, I spot a sprawling mid-century modern home with a red truck in the driveway; I know I’m at the right place.

Ramon Salas moved to Azusa from Zacatecas, Mexico, in 1973, seeking work and better opportunities. He found what he was looking for at Azusa Greens Country Club — an 18-hole public golf course offering stunning views and casual clientele. After working in a furniture factory, he took a job at the golf course as a handyman, eventually working his way up to lead mechanic.

Along the way, he befriended the course’s head professional, Jerry Herrera, whose former glory came from coaching Tiger Woods during his amateur days. Herrera asked to teach Ramon’s children golf, an offer Ramon couldn’t refuse. While his son Marvin’s interest waned as he pursued football, his youngest daughter took to the game immediately.

Her name was Lizette.

“It was a mind-blowing experience. Not only to know that there was a golf course in our hometown, but what my dad did,” Lizette remembered.

Lizette’s first lesson didn’t involve the fundamentals of holding a golf club. Instead, she learned how to dress. No jeans, no t-shirts and especially no flip-flops.

Golf was a foreign sport many Latinos in the area didn’t have access to, but Ramon quietly performed side jobs at the course in exchange for one lesson a week for young Lizette.

From that point on, Lizette progressed in the game with Ramon by her side. She played in LA city junior championships, and at Azusa High School, she played on the men’s golf team, earning respect by beating the guys and, eventually, becoming the school’s first state champion.

“I didn’t even know USC was in the cards. I didn’t think they would be interested in a little Mexican girl from Azusa, California. I was so scared that I wouldn’t answer her phone calls,” Lizette said.

When Coach Gaston finally got Lizette to agree to dinner, she offered her a full scholarship.

“She just extended her hand and said, ‘Would you like to be a part of the Trojan family?’ I could just hear my mom say, ‘Yes, say yes!’ And I shook her hand, and that was it for the next four years,” Lizette reflected.

By the end of her college career, Lizette had amassed an impressive resume, including four All-American honors and being the Pac 10’s player of the year — twice. She helped the Trojans win a national championship in 2008 and was chosen to speak at USC’s athlete commencement. Her pride and confidence beamed on stage: “There were countless times when I was told that I wasn’t going to make it because, according to them, Mexicans don’t play golf. But I just have one thing to say to them: they do now.”

The next day, Lizette turned professional and set off on a road trip with her dad in their 2006 red Toyota Tacoma pickup. Listening to the same CDs on repeat and using a Garmin GPS for navigation, they traversed the country for Futures (now called Epson) Tour events, vying for a shot at the big leagues.

“Sometimes to save a few bucks, we would drive up to a rest area and rest for a little bit. It was tough; I remember crying sometimes in the back, just wanting to go home,” Salas said. “My dad just kept saying, ‘In order to be great, you have to sacrifice a lot.’”

As the truck became home, golf became an escape. In 2011, Salas entered Q-school and survived a 9-for-1 playoff, officially punching her ticket to the LPGA Tour.

“Those first years were, I wouldn’t say heaven, but it was close to that,” she said. “You see rookies completely nervous and kind of shocked at how demanding tour life could be. I was just embracing it.”

On the course, Lizette quickly made a name for herself for her smiles and fist pumps. Television broadcasters took to her immediately calling her, “the next young American star.” In her second year on tour, she made the Solheim Cup team and halved her match against the intimidating Norwegian powerhouse, Suzann Pettersen — who is now the captain of the 2023 European team.  In 2014, Lizette got her first win at the Kingsmill Championship. Hoisting the crystal trophy after being drenched in champagne, she said, “I’m just trying to breathe.”

“I had a team that believed in me; I believed in myself,” Lizette said. “I kind of had this mentality that it was just going to keep coming, and I quickly learned that’s not the case in golf.”

Although she still made Solheim Cup teams, Lizette went winless for the next six years.

“Sometimes when you think you have it, you lose it,” Salas said. “In my early years, this never felt like a job, it just felt like a playground. Later, I would hear just a one-time winner and that hurt.”

For six years, Salas came up short. When the pandemic hit in 2020, everything came to an abrupt halt. The tour closed up shop indefinitely, and Lizette returned home to Azusa, isolating herself from her support network and, in the process, losing herself to anxiety and depression.

“I had several breakdowns on the driving range, and I couldn’t even express in words what I was feeling. I just knew that I had to get out of that situation,” she remembered. “I’m a very emotional person, but when it comes to sharing that with people, it’s almost like you just brush it under the rug and hope that it goes away.”

Mexican culture raised her to not show emotion. But at the 2021 KPMG Championship, contending for the lead, she decided to speak about her struggles for the first time at a post-round press conference.

Reporter: Your game is moving in the right direction, what’s shifting?
Lizette: I’m not afraid to be out here anymore

Reporter: When were you afraid?

Facing reporters, she spoke into the mic, “Probably all of 2020. That was a really rough year for me. One of the lowest points in my career mentally. I just didn’t like myself; I didn’t like who I was. I wasn’t in the right mind. It was a downward spiral.”

Looking back on the moment, Lizette recalled, “I felt like it was a great moment to address mental health, but also to let it out. It’s scary to talk about your feelings; I didn’t want people to feel sorry for me.”

Mina Harigae, the 2022 U.S. Women’s Open runner-up and Lizette’s 2021 Solheim Cup teammate was surprised to hear her speak so openly about her mental health.

“I couldn’t believe that someone like her could feel that way,” Harigae said. “Then again, it made me feel like if Lizette can feel like that, then it’s okay that we all feel like that. It’s okay to be so open about it.”

It’s still hard for Lizette to talk about her feelings. As a first-generation American, she’s learned to be tough and appreciate the hardships her parents faced.

“Sometimes, you need to acknowledge that you need help, and that’s okay. You’re not alone, and there is a light at the end of the tunnel,” said Lizette.

Watching Lizette on the course, you’ll see her characteristic smile has returned. In July of 2022, she secured her second-career win after teaming up with Jennifer Kupcho at the Dow Great Lakes Bay Invitational.

On off weeks, she returns to her home in Azusa.

Things have changed; Azusa Greens Country Club now sits empty with yellow caution tape hung across each entrance. The driving range has dried up, and the clubhouse sits vacant, a shell of its former glory.

When Ramon’s not tinkering in the maintenance shed, he’s at Lizette’s home with the rest of her family. Martha Salas brings Mexican donuts and buzzes around the kitchen cooking. Lizette’s nephew hits golf balls into a net in the backyard that her father built for her during the pandemic. Outside, the red Toyota Tacoma sits in the driveway, her old GPS still in the backseat, serving as a reminder of where she came from and the long road she’s traveled.

Looking out over the valley, she smiles, “Winning’s great and representing your country is amazing, but I feel like, now, there’s more to golf than just playing.”