↓ Skip to Main Content
Home › Blog › Looking back at the nine times Rory McIlroy ascended to world No. 1

Looking back at the nine times Rory McIlroy ascended to world No. 1 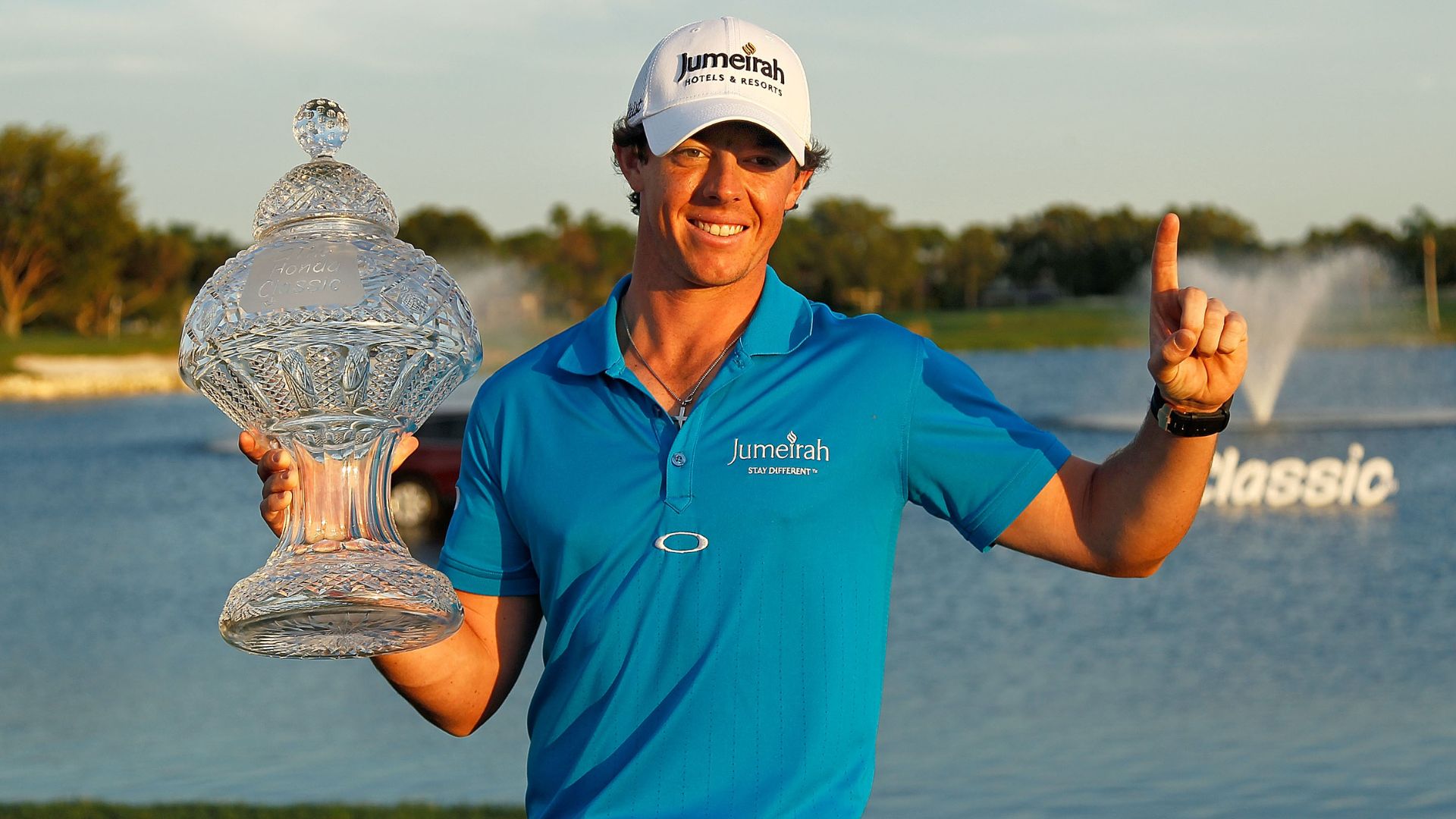 
After winning the CJ Cup, Rory McIlroy sits above every other golfer on Earth … again.

With his 23rd PGA Tour win, the Northern Irishman became the Official World Golf Ranking’s No. 1 player for the ninth time, trailing only Tiger Woods and Greg Norman for the most ever (11).

It’s been a decade since McIlroy first notched that feat — and he hasn’t fallen out of the OWGR’s top 15 since then.

Let’s look back at all nine times McIlroy became the world’s top-ranked player.

While McIlroy was standing on No. 13 at PGA National, the crowd erupted. Why? Tiger Woods made an eagle on 18 and was within a shot of McIlroy after the lowest final round (62) of his career.

The Northern Irishman, however, was clutch down the stretch and held on for a two-shot victory, his first since the 2011 U.S. Open.

With the win, McIlroy, replacing Luke Donald, became the second-youngest world No. 1 since Woods, who took the throne at age 21 after the ’97 U.S. Open.

McIlroy’s first run at No. 1 lasted only two weeks, but it didn’t take long for him to get it back. After a month at No. 2, he returned to No. 1. That run, however, also only lasted two weeks, but he was back on top of the OWGR in a week.

Though McIlroy fell to Rickie Fowler in his first playoff on the PGA Tour, the Northern Irishman jumped back into the OWGR’s top spot with a runner-up at Quail Hollow. He’d fall down a spot, again, just a few weeks later.

Dropping to No. 3 by August, McIlroy’s eight-shot rout at Kiawah Island — breaking Jack Nicklaus’ record for the PGA’s largest margin of victory — was not only his second major win, but he became the world’s best player for the fourth time in months. McIlroy would hold that spot for 32 weeks.

Two weeks after his wire-to-wire win at The Open, McIlroy had an encore.

In just three holes, McIlroy wiped Sergio Garcia’s three-shot lead and closed with a 66 to win at Firestone and claim world No. 1 again, overtaking Adam Scott.

In 2013, McIlroy finished 50th in the FedExCup standings and fell outside the world’s top 10 as he was adjusting to a new equipment deal and going through a management change. But in 2014, he went on a run more impressive than his heater in 2012.

”This is better (than ’12),” McIlroy said after winning at Firestone. ”Mentally, I’m really sharp.”

Indeed he was, because the next week, he’d win the PGA and stay at No. 1 for another 54 weeks.

No. 1 since his torrid stretch in ’14, McIlroy was bumped to No. 2 by Jordan Spieth after the PGA Championship. A few weeks later, McIlroy would jump back to No. 1 after The Barclays, even though he didn’t play that event.

The following week, McIlroy needed a top-10 at the Deutsche Bank Championship to have any chance of keeping the No. 1 ranking. But with a T-29, McIlroy fell back to No. 2 and Spieth, despite missing the cut, was No. 1 again.

The Tour had a week off sandwiched between Deutsche Bank and BMW championships. And due to the complexities of the OWGR, McIlroy went back to No. 1 after the week off. However, even with a T-4 at the BMW, McIlroy still slid back to No. 2 as Jason Day notched his third win in five starts, the first of which was the PGA Championship.

It’d be a long road back to the top for McIlroy.

Propelled by a 2019 in which he won the FedExCup, McIlroy rose back to No. 2 and was knocking on the world’s top spot by year’s end.

Then, one month into the roaring 2020s, the four-time major champion ended Brooks Koepka’s 38-week reign ahead of the Genesis Invitational and become world No. 1 for the first time in a half-decade.

McIlroy’s 53-month gap set a new record for longest time between a player losing and regaining the No. 1 ranking.

He held that spot for 11 weeks, losing it after the 2020 Memorial, several weeks after the Tour’s COVID restart.

It’s been a year like no other for McIlroy.

Though he didn’t end his eight-year major-winning drought, the 33-year-old, coming into the CJ Cup, won the FedExCup and had 11 top-10s since the Masters on both the PGA and DP World tours.

Rory McIlroy has once again ascended to world No. 1, and this time he did it with the weight of the golf world on his shoulders.

However, through all his strong play, McIlroy had quite a year off the course — taking the microphone as the most vocal defender of the PGA Tour in a year where LIV Golf created a rift in the sport like never before.

To end his year on the PGA Tour, McIlroy successfully defended his CJ Cup title and rose back to world No. 1. And despite the off-course turmoil that plagued golf in ’22, McIlroy couldn’t have been happier, fighting emotions after his victory at Congaree.

“I’ve worked so hard over the last 12 months to get back to this place,” McIlroy said after claiming world No. 1 for the ninth time. “I feel like I’m enjoying the game as much as I ever have.”