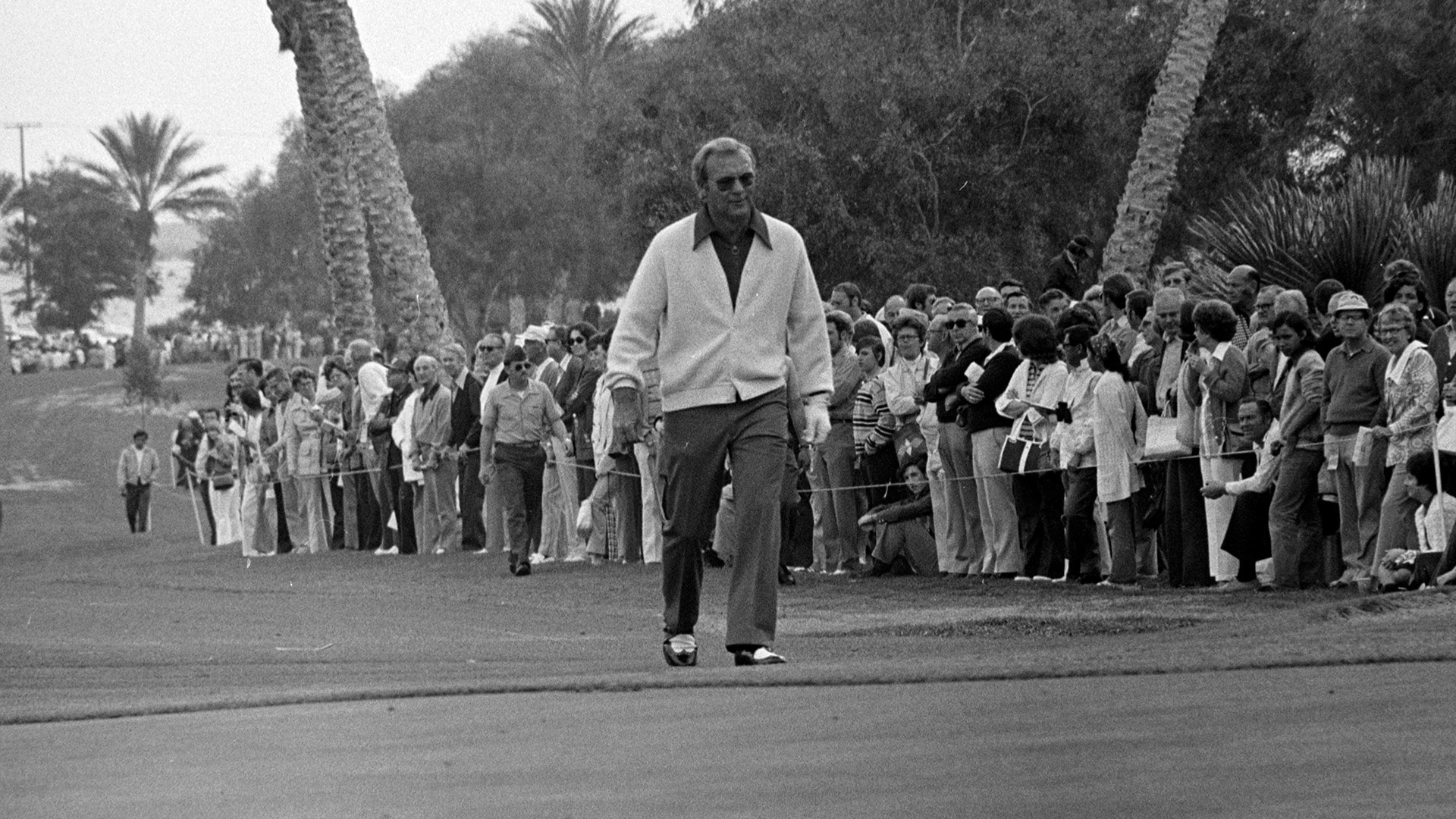 The American Express has been a part of the PGA Tour schedule since 1960 and has quite a highlight reel.

Ahead of the Tour’s return to California this week, here is a look back at some of the most memorable moments in the desert.

There had been two 59s on the PGA Tour prior to Duval accomplishing the feat in 1999, but neither had come in the final round to win the tournament. Duval had won his first start of the season at the Sentry Tournament of Champions by nine shots and was looking to keep it rolling at what was then called the Bob Hope Chrysler Classic. Duval hit 17 greens on his way to a 59 and didn’t hole a putt outside 10 feet all day. The official statistics showed him holing 54 feet of putts that famous Sunday. The former world No. 1 birdied four of the five par 3s on the Palmer Private Course at PGA West, prompting playing partner Jeff Maggert to joke, “I didn’t realize we were playing par 2s today.”

“I probably can’t play better,” Duval said after his round, which included 11 birdies and an eagle at the par-5 18th to reach the magic number of 13-under 59.

The 18th began with a 320-yard drive (remember, this was 1999), leaving Duval with 218 to the hole. The 5-iron came out of the bag and he sent his approach sailing into the California sky before landing in the middle of the green and rolling to within 7 feet of the back flag. Duval then had to wait for Maggert and the third member of the group, Bob Tway, to putt out before he could step over the eagle try. He calmly rolled it into the middle of the cup before unleashing a couple of fist pumps in celebration. But the celebration was for the 59, not the trophy. Duval had started the day six shots back and had to wait for the groups behind him to finish their rounds to know whether his historic Sunday was enough to win. Steve Pate needed to birdie 18 to force a playoff, but could only manage a par, giving Duval the win after one of the most historic rounds the game has ever seen.

This week marks the 50th anniversary of Palmer’s 62nd and final Tour win at the 1973 Bob Hope Desert Classic. Palmer was 43 years old and hadn’t won a tournament in two years, but he had an affinity for this event. He had triumphed four times prior to his last win out west, and Arnie’s Army engulfed the golf course that Sunday hoping for No. 5. Speaking of five, that’s how many rounds the 43-year-old would have to put together to win the event, as it was a five-round tournament from 1960-2011. He would also have to outduel Jack Nicklaus, who was 11 years younger than Palmer and had already won 11 of his eventual 18 major championships.

Nicklaus opened with a 64 that had him seven shots clear of Palmer, who could only muster a 71 to start the week. By the start of the final round, Palmer trailed Nicklaus and a young Johnny Miller by a shot. Palmer and Nicklaus were paired together in the final round, which didn’t start favorably for the Golden Bear. The opening hole was a relatively easy par 5, which Palmer birdied and Nicklaus bogeyed, leaving the eventual 73-time Tour winner trailing for the first time all week. The drama continued throughout the day, but Palmer ultimately stood on the 18th tee with a two-shot lead. Nicklaus had a chance to make eagle and put the pressure on his longtime rival, but his 20-footer burned the edge and Palmer rolled in a 7-foot birdie putt to win by two. Palmer slung his visor into the air in celebration for the final time on the PGA Tour.

Palmer earned $32,000 with his victory that week. In 42 career starts at the Desert Classic, including five wins, one of the game’s great legends won a total of $132,963.

Two years after Palmer captured his last Bob Hope title, Miller emerged victorious for the first time at the event. It was part of a three-year run that included seven Tour victories for the famed Miller at desert courses, two of which came at this event.

Miller shot a 72 at La Quinta in the third round in 1975, which left him sitting T-2 through three rounds of the five-round tournament. It was notable because it was the first time in 16 rounds – dating to the Phoenix Open of 1974 – that Miller didn’t have at least a share of the lead while playing desert golf.

That deficit, of course, wouldn’t last. Miller closed with rounds of 66-68 to finish the tournament at 21 under and win by three shots over Bob Murphy. It was his third consecutive win that season on the desert swing, having already captured the Phoenix Open and Dean Martin Tucson Open just a few weeks earlier.

Miller returned to California in 1976 with all the confidence a player who had become known as the Desert Fox. He told reporters early that week, “I’m not saying I will win, but I am saying I’ll be surprised if I don’t.”

It was no surprise to anyone when Miller shot a final-round 63 and once again finished three shots clear of his closest challenger.

The year is 1992 and the Bob Hope Chrysler Classic playoff features five players: Cook, Gene Sauers, Tom Kite, Rick Fehr and Mark O’Meara. The five were tied at 24 under par after 90 holes in the five-day event, and would alternate between the first and 18th holes – both par 5s – in the sudden-death playoff.

It ultimately came down to Cook and Sauers, who matched each other birdie-for-birdie over the first three playoff holes. The third playoff hole featured a chip-in from Cook in the 20- to 25-foot range, matched by a 7-foot birdie putt from Sauers.

Then came the final trip to the 18th.

Cook was greenside in two, but this time faced a shot that he recalled being “75, 80 or 100 feet.” We’ll just say it wasn’t the simple chip he holed on the previous green. Nonetheless, the result was the same. Cook conjured the same magic he had at the first and holed a second consecutive chip, this time for an eagle-3 and a victory.

“I wasn’t surprised that the first one (chip shot) went in. It had that look,” Cook said. “But the second one was a fluke. But I’m glad the fluke happened to me.”