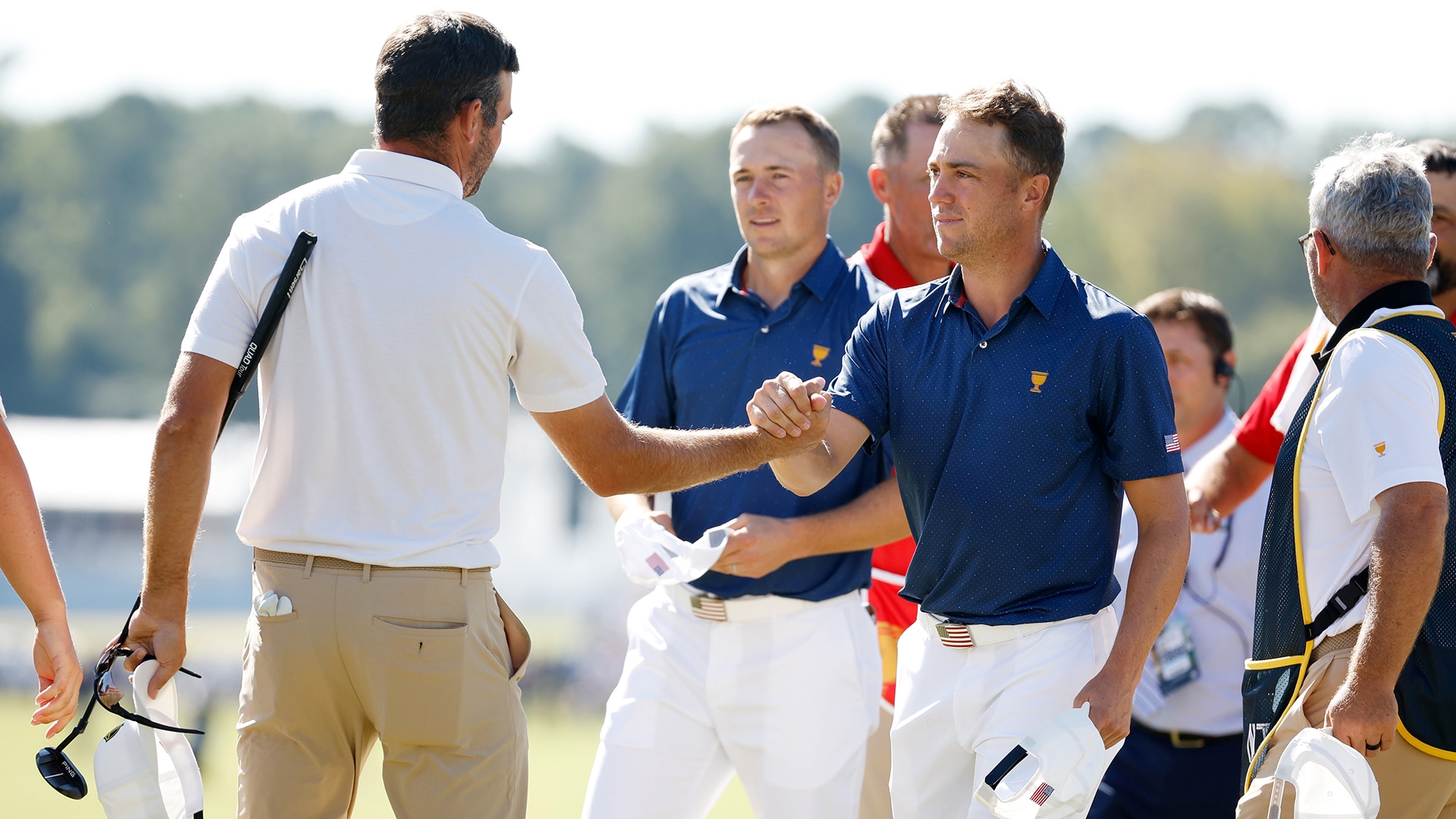 For the first time in this 14th Presidents Cup, the U.S. didn’t win a session. Unfortunately for the Internationals, they could only manage a split of Saturday morning’s foursomes at Quail Hollow Club.

As a result, the Americans will take a 10-4 lead into Saturday afternoon’s fourball session.

In 10 of the previous 13 Presidents Cup, the leading team after three sessions has gone on to win the Cup, and just once has a team won the Cup after trailing through three sessions. That happened in 2019, when the U.S. trailed by four points after Saturday morning before winning by two, 16-14.

Here is a recap of Saturday morning’s matches in Charlotte, North Carolina:

The visitors took the early lead after Im stuffed his approach to 5 feet and Conners rolled in the birdie. But the American duo of Spieth and Thomas won the next two holes, each with par, and three of the next five to go 2 up after seven.

From there, Spieth and Thomas played clean golf. A sloppy three-putt bogey by the Internationals pushed the American advantage to 3 up after 13 holes, and the U.S. pals improved their Cup record to 7-2 together, 3-0 this week, after an eventful par-4 15th hole, where Im followed Spieth’s tee ball into the water and the Americans took the hole and the match with bogey, their first since the second hole.

After the Americans took an early lead through two holes and then went 2 up after eight holes, the veteran Internationals caught fire by winning three straight holes to take their first lead. The ninth hole was conceded after the Americans got into some right rough trouble, and then Scott made two birdied putts between 10 and 15 feet on the next two holes.

The Internationals won the following two holes, too, making it five straight as the Americans doubled the par-5 13th to play Nos. 12 (a par-5) and 13 in 2 over.

Pars the rest of the way were enough for Scott and Matsuyama to end the match on No. 16, 3 and 2.

It was a back-and-forth front nine as the Internationals twice led 1 up before Burns drained yet another long putt, this time at the par-3 sixth from 35 feet, and the Americans won the par-5 seventh to go 1 up for the first time.

But Scheffler hit a shank off the tee at the par-3 10th and the Internationals’ match-tying birdie was conceded following a Kim tee ball to 15 feet.

A hole later, Lee drove the green at the 303-yard, par-4 11th, and Kim followed by sinking a 36-footer for eagle to win the hole and retake the lead, which caused him to drop his putter, fist pump hard and scream, “Let’s go!”

Twice the U.S. got it back to tied over the next few holes, but Lee converted a 12-footer for birdie at the par-4 15th – and gave a big fist pump of his own – to put his side up for good in the match, which they won two holes later.

The Americans built a two-hole lead after three before the Internationals quickly battled back. Kim chipped in at the par-3 sixth to get the match back to tied.

But Finau and Homa took turns hitting great approach shots inside of 8 feet at Nos. 8 and 9, respectively, and led, 2 up, at the turn. Davis couldn’t convert a 12-footer for an up-and-down par at the par-4 10th, and the International bogey handed a third straight hole to the U.S. pair.

The Americans got their second point of the day after Kim’s drive found the water at the par-4 15th, the course’s usual finishing hole, and the Americans won the hole with par.