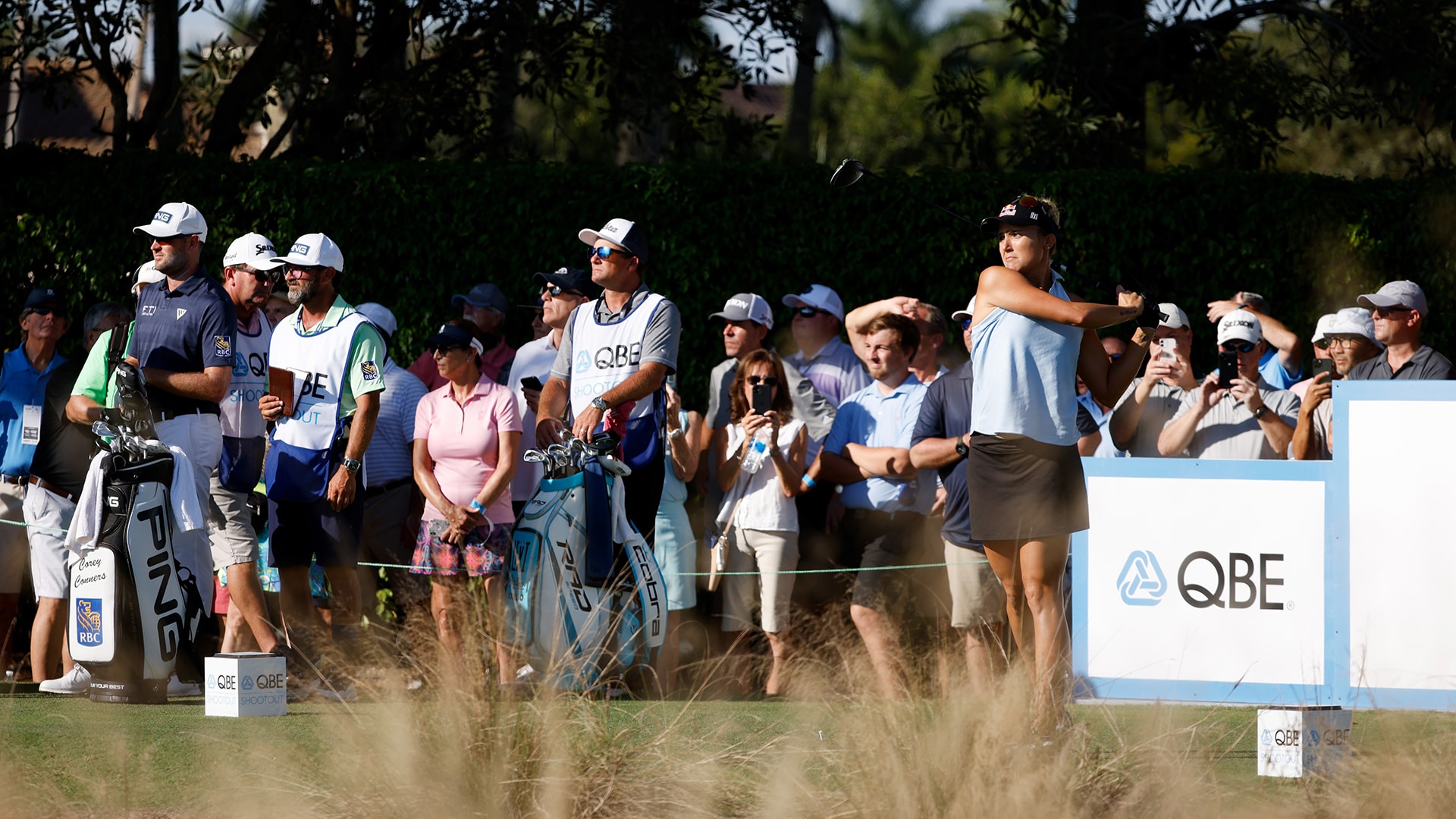 Nelly Korda and Lexi Thompson are representing the LPGA Tour this week in the QBE Shootout. Next year, they will have plenty of company.

The QBE Shootout will become a mixed-team event starting in 2023, returning such a format to the schedule for the first time since the JC Penney Classic in 1999.

Players were informed of the change at a meeting last week in the Bahamas.

Details have not been confirmed, such as the qualification criteria or the format. The QBE Shootout dates to 1989 when it was more commonly known as the Shark Shootout.

The PGA Tour had been working on converting the World Cup of Golf into a mixed-team event, but progress was slowed when the COVID-19 pandemic arrived.

The mixed-team format dated to 1960 when it was called the Haig & Haig Scotch Foursome. Mickey Wright used to play, as did Sam Snead. Past champions of the JC Penney Classic included Curtis Strange and Nancy Lopez. Beth Daniel won it three times, twice with Davis Love III and once with Tom Kite.

Tiger Woods played in 1996 with Kelli Kuehne, both reigning U.S. Amateur champions that year who had signed Nike contracts.

The most recent winners were John Daly and Laura Davies in 1999.

“This is long overdue. It will be a massive boost,” said Dottie Pepper, who won in 1992 with Dan Forsman. “It was a a fun week. And if you were in contention, it was a grind.”

The QBE Shootout has featured a few LPGA players in recent years. Ditto for the old CVS Charity Classic in New England, where Juli Inkster and Natalie Gulbis were the first women to play in 2007.

One of the more prominent mixed-team events was the “Battle at Bighorn” in 2001 when Woods and Annika Sorenstam went extra holes to beat David Duval and Karrie Webb.

The purse this week at Tiburon Golf Club in Naples, Florida, is $3.8 million, with each team splitting the $950,000 winner’s check. Only seven LPGA events offered a larger first-place check this year than $425,000, including the five majors and the $2 million prize at the CME Group Tour Championship.

“I think the year Donna Andrews won it, that was her biggest check of the year,” Pepper said. “It was a split purse right down the middle.”

“The LPGA tacked on our service fee. It was like 6%. So we actually got a smaller check than our partners,” Pepper said with a laugh.

Money will be an incentive for LPGA players. The key is how many top PGA Tour players are interested, though not many of them play now in the QBE Shootout. The field of 12 teams this year has nine of the top 50. Max Homa at No. 16 is the highest-ranked player.

Participation of top players is what contributed to the demise of the JC Penney Classic.

“The mixed team back in our day, there was nothing in the offseason,” said two-time U.S. Open champion Curtis Strange, who won in 1980 with Nancy Lopez. “It was a chance to knock some rust off in some nice weather. It was great fun. You got to meet the women of their tour, which was a good thing, have a beer together.

“When you get to know each other there becomes more mutual respect,” he said. “And some of those friendships last forever.”

Inkster won the JC Penney in 1986 with Tom Purtzer, and she said they are like siblings to this day because of time spent at the tournament.

“It was one of my favorite tournaments,” Inkster said. “The guys who didn’t want to play didn’t play. And those who did were there. But that’s how I got to know those guys really well. It was good money and a lot of fun. It was good for the men to see the women play, and how well they can play.

“You enjoy the company. Learn about you, learn about me and let’s go win the thing.”