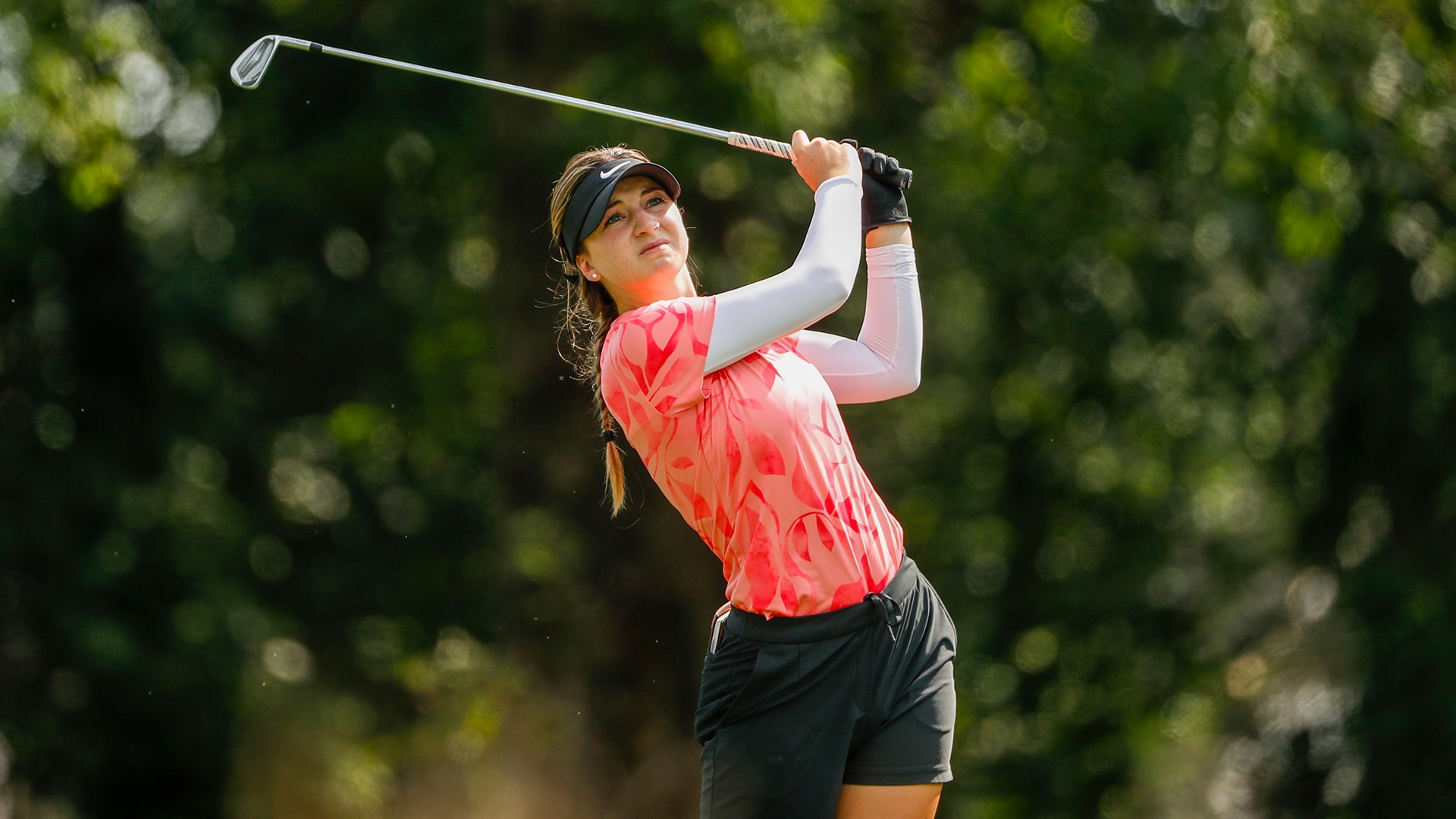 
When Tuesday’s second round of the U.S. Women’s Amateur was postponed because of Hurricane Isaias, Gabriela Ruffels didn’t fret.

In a way, she preferred it.

The reigning Women’s Am champ and rising senior at USC, Ruffels is taking two summer classes and had final exams to complete in each of them.

“It actually worked out perfect that it was a day off because I could focus on my finals,” said Ruffels, who opened her title defense in even-par 72 Monday at Woodmont Country Club in Rockville, Maryland.

When she returned to action Wednesday, Ruffels put together a second-round 71 to tie for fifth in the stroke-play portion and easily advance to the Round of 64, which begins Thursday.

The performance comes after an up-and-down junior season for Ruffels, who opened last fall with a 48th-place finish at the prestigious Annika Intercollegiate. She bounced back in a big way in February, winning the Rebel Beach Intercollegiate, only to withdraw because of injury in the Trojans’ next event, their last before the COVID-19 pandemic canceled the season.

The 20-year-old Ruffels, the 16th-ranked women’s amateur in the world, stayed sharp this summer by competing in several Cactus Tour events. She won one of them, in June in Las Vegas, and also entered last month’s Jacksonville Amateur, a men’s event in Florida.

Between events, she spent about a month with her brother, Ryan, who plays on the Korn Ferry Tour and lives in Orlando, Florida.

“I got to see how he practices, how hard he works,” Ruffels said. “… We’re both very different people. People say that we’re complete opposites. He is very technical. He’ll spend a lot of time on the range. He works with his coach a lot, whereas I’m more I like to get out on the course and do my practice. I’d rather play 36 holes in a day than be on the range for like three, four hours. But the biggest thing I took from him was his work ethic and how much time he does spend out there and how professional he is with his practice. Every minute he spends is worthwhile, and I think that’s the biggest lesson I got from being with him.”

A year after defeating Albane Valenzuela in the final at Old Waverly, Ruffels can, with a win Sunday, join the list of back-to-back Women’s Am champs, one that includes Juli Inkster, Kay Cockerill, Kelli Kuehne and most recently Danielle Kang.

“With everything going on, I did not think that they were going to hold the event,” Ruffels said.  “I didn’t think that any sporting events were going to come back until next year. But I mean, once I found out, I was super excited and yeah, just super happy to be back here and try and get it again.”