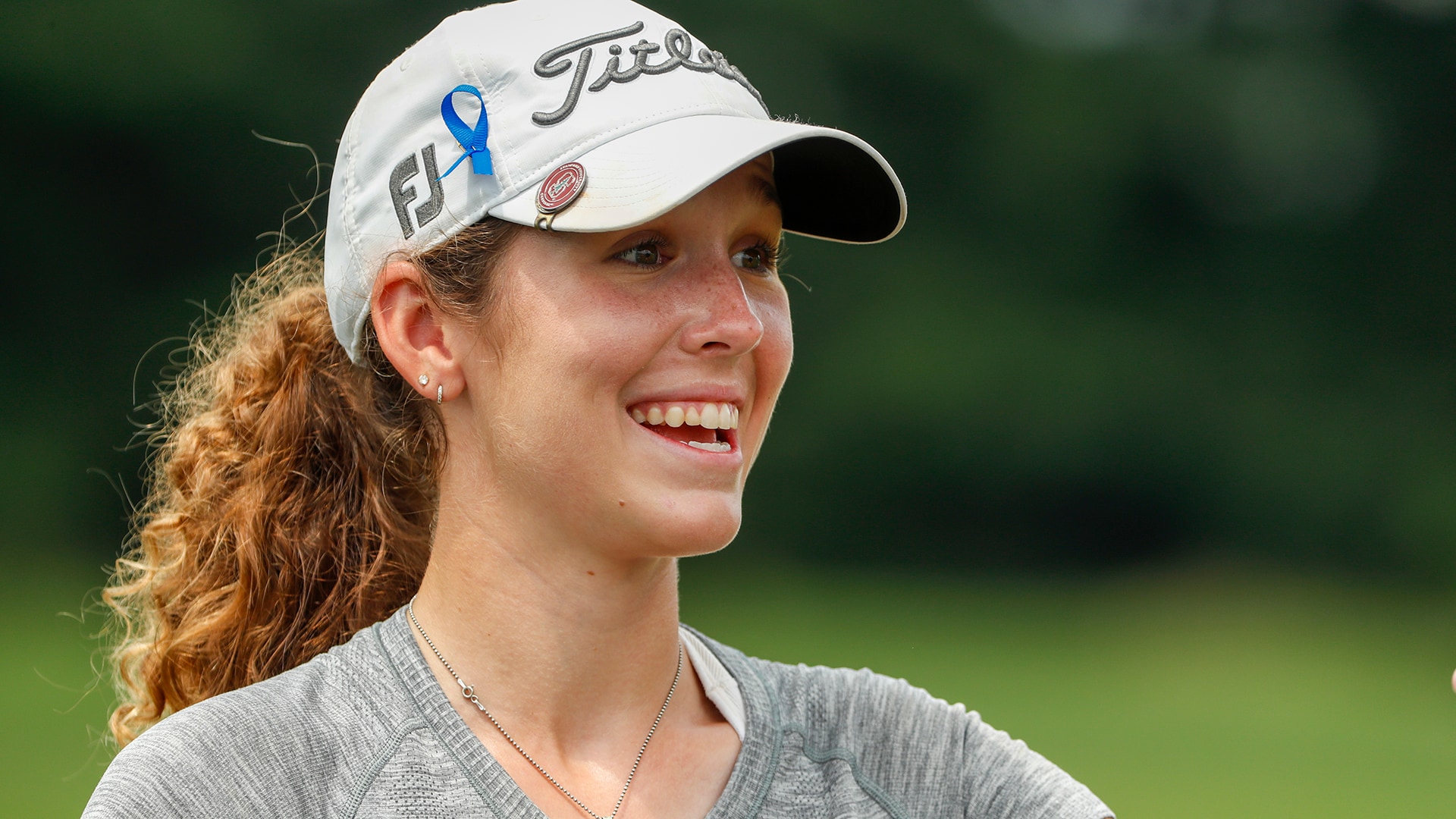 
The first round of match play Thursday at the U.S. Women’s Amateur provided plenty of good headlines.

Medalist Rachel Heck advanced to the second round for the first time.

Wake Forest teammates Rachel Kuehn and Emilia Migliaccio each won, while Michigan State teammates Valery Plata and Haylin Harris had to play each other, with Plata coming away with the victory.

And after all of it, we have some appetizing second-round matchups on the table for Friday morning at Woodmont Country Club in Rockville, Maryland.

First, there was Heck, leading off the day with her match against Arizona’s Therese Warner. The incoming freshman drained a couple of long birdie putts to stake a 4-up lead through four holes, but Warner clawed her way back, sinking a 50-footer for birdie on the penultimate hole to force an 18th hole.

Heck was able to advance with a birdie at the last, making the second round of match play for the first time in four USWA appearances.

“I just got off to a hot start, but then I fully expected her to make a lot of birdies, make a run at it and come back, which of course she did,” Heck said. “… Not until 18 was over was I able to feel confident about it.”

Speaking of confidence, Ruffels has rediscovered hers after an up-and-down junior season at USC. She withstood a shaky start and some windier conditions in the afternoon to dispatch of Arkansas’ Kajal Mistry, 3 and 2.

Ruffels didn’t make a birdie until the 13th hole Thursday, but she’s not letting it bother her. Every win is a match closer to her becoming the latest back-to-back USWA champ and first since Danielle Kang in 2010-11, though she has a tough opponent in Friday;s Round of 32: Stanford sophomore Angelina Ye, who won a hard-fought matchup with her potential future Cardinal teammate, Megha Ganne, who recently committed.

“I’m trying to make it feel like a regular golf tournament, but obviously there’s a little bit more pressure and expectation, but that’s what I thought it would be coming into it,” Ruffels said. “Honestly, it’s just a bunch of fun. I’m just having fun out there, and whatever happens, happens.”

While Ruffels may be the reigning champ, Migliaccio is the highest-ranked player in the field, at No. 4 in the World Amateur Golf Ranking. She birdied three of her last five holes in a 3-and-1 victory over Baylor’s Gurleen Kaur to run her match-play record to 28-9-2 since 2016. She will now face teenager Amari Avery, who used a hole-out eagle at the 14th hole and two closing birdies to edge incoming Alabama freshman Michaela Morard, 1 up.

Meanwhile, Kuehn birdied Nos. 7-9 to take control in her match against Y. Tanida before winning on the penultimate hole. She’ll get Arkansas’ Brooks Matthews in the next round.

As for the two Spartans that squared off against each other, Plata on the par-5 third hole with par and never looked back in a 3-and-1 victory. Both will be juniors this upcoming season after finishing last season ranked first and fourth, respectively, on team in scoring average. Plata won the Tar Heel Invite last fall.

Plata moves on to face 17-year-old Zoe Campos, who routed college All-American Pimnipa Panthong, who transferred from Kent State to South Carolina this summer, 7 and 5.