Sober Chris Kirk reflects on what quarantine might have been 
ST. AUGUSTINE, Fla. – Chris Kirk knows that the timing could have been much worse.

A winner four times on the PGA Tour, the 35-year-old took an extended leave of absence last summer to address issues with alcohol abuse and depression. He missed more than seven months of competition, returning earlier this season at the Mayakoba Golf Classic.

Kirk has struggled to get his game on track since returning, missing five of seven cuts. But he’s thankful that he sought treatment when he did, given the prospect of potentially staring down his demons this spring during a pandemic that medical experts expect could amplify depression and substance abuse issues across the country.

For the second consecutive week the PGA Tour reported no positive COVID-19 tests. But two more were reported on the Korn Ferry Tour after four last week.

“I was very thankful to have already kind of been through it. Because I know that if it had been me two years ago, and the quarantine happened, it would have been really bad,” Kirk said after the opening round of the Korn Ferry Tour’s King & Bear Classic. “I would have gotten a lot further into the hole. So thank God that everything that happened to me happened to me when it did, and I was able to stay with my program and everything that I’m doing, and stay on a really good course. Because I’m sure that it affected a lot of people negatively.”

Rather than facing an internal struggle, Kirk spent the three-month hiatus enjoying the crisp spring weather on his 40-acre property in Athens, Georgia. He kept his game sharp, playing about once a week, but more of his energy was focused on spending time with his three sons, ages 8, 6 and 2.

Kirk is one of only a handful of players who teed it up last week at Colonial, where he earned his most recent PGA Tour win in 2015, and then dropped down this week to the Korn Ferry event near the World Golf Hall of Fame. He is technically first alternate at the RBC Heritage, but because of unusual field circumstances there are currently 151 players listed for Harbour Town. That number would have to drop below 144 before Kirk got in.

The situation has led to some awkward if well-meaning texts in recent days, including one from Cameron Tringale who assumed that his Heritage withdrawal Wednesday morning meant that Kirk would get his spot. 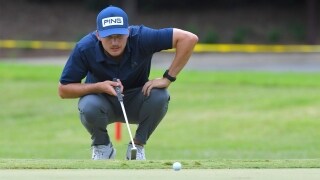 The Korn Ferry Tour’s hiatus was inopportune for some, but welcomed by many. Those at the top of the leaderboard this week are leaning on lessons learned.

“Somebody asked me if I played the first round here (on Wednesday) and then got into the Heritage, could I still withdraw and go play there. I don’t know about that, but it’s been pretty funny,” Kirk said. “I’ve had to explain the ‘playing beyond the 144’ field size dynamic to a lot of people. But it’s all good.”

But Kirk hopes to make the most of his opportunity, and he’s off to a strong start after a bogey-free, 6-under 66 left him three shots off the lead. It marked his lowest competitive round since a third-round 66 at Bay Hill in March 2019. He believes that his ball-striking is at or above the level he reached in his prime, when he got as high as 16th in the world rankings, but knows he still needs to regain the confidence he flashed while finishing second in the 2014 FedExCup standings.

Kirk hopes to take steps toward that goal this week, even if it’s not against the caliber of competition he’s used to facing.

“Going into the start of the week at a PGA Tour event, and feeling like you’re one of the best players there, I don’t have that now, to be honest with you,” Kirk said. “That doesn’t mean that it can’t come back, or it won’t come back. I sure hope it does.”