Sounds of (mostly) silence: Woods gets the ordinary pro experience on Thursday 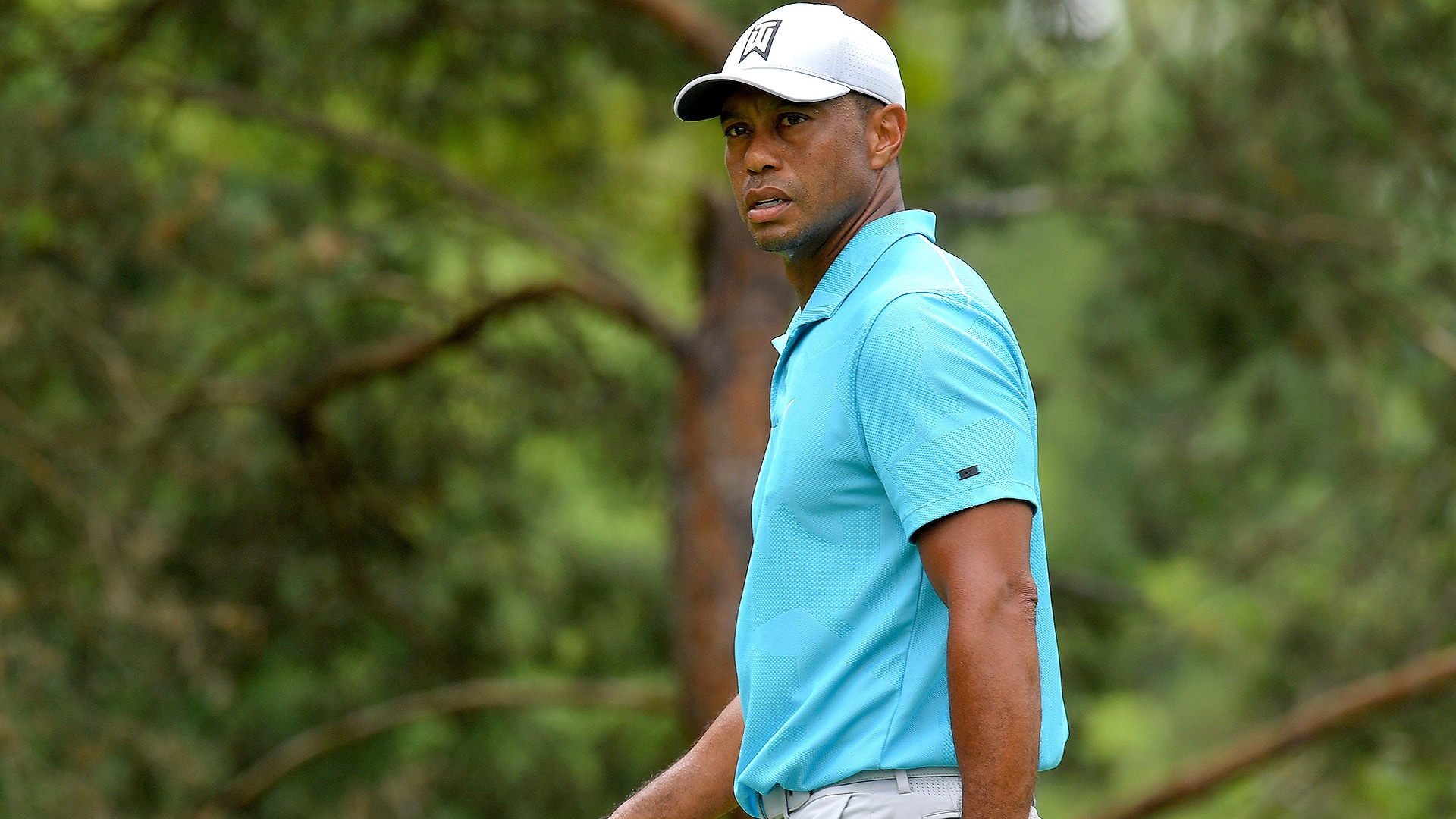 Surrounding the first tee at Muirfield Village were 19 carts, a dozen reporters, seven cameramen and three photographers. There were security guards and volunteers and a few curious vendors who had wandered outside during a break. Six Tour types in shirts and ties huddled under a tent. On the adjacent practice putting green his peers paused their preparation to watch: Keegan Bradley and Jason Dufner, Corey Conners and Nick Taylor. Some caddies, too.

At 1:17 p.m., an official pulled down his face mask for an announcement:

“Next to play, Tiger Woods!”

His hat lowered, Woods appeared to smirk. Around the tee there was no audible reaction, other than a few birds chirping. Nary a clap.

All cheers that have accompanied Woods not just during each and every round of his legendary pro career, but even in college. Heck, even in high school, as he began to cement his star as a three-time U.S. Junior champion. The last time he played, from start to finish, sans spectators, in all likelihood, was in the 1980s. As a middle-schooler.

We’re back, baby, so here are some thoughts after Tiger Woods returned to the PGA Tour with a 1-under 71 at the Memorial Tournament.

“It’s just a very different world out here,” he said at the Memorial Tournament, where he’s making his first tournament appearance in five months, and his first of the COVID-19 era.

On two occasions in his pro career Woods has played without spectators, but never a full tournament. At the 2012 AT&T National – the tournament he used to host outside Washington, D.C. – a derecho swept through the area before the third round. With a significant cleanup required, Congressional was closed to spectators, but, somehow, a couple hundred people still made their way onto the property to watch golf’s biggest star. Then again last fall, another day of relative quiet: The second round of the Zozo Championship was played behind closed doors because of a typhoon, yet hundreds waited behind the 18th green.

What’d both of those events have in common?

Woods went on to win.

And maybe there’s something to be said for that. Yes, Woods has won 82 times on the PGA Tour, almost entirely in front of galleries slammed eight to 10 deep, but it’s also worth noting that he summoned some stellar golf when he finally didn’t have fans stampeding outside the ropes or screaming his name or clamoring for his autograph. He could just … do his work. In peace. Each shot was still documented by reporters and captured by TV cameras and beamed around the world, but at last there was a stillness to the hysteria he created.

On Thursday, for the first time in 18 trips to Jack’s Place, Woods could relish the simple things – like walking directly from the 16th green to the 17th tee, without going some roundabout way to avoid a throng of spectators.

“For me, I don’t have the marshaling and the crowd and the people moving,” he said. “Certainly, it’s a different feel, one that’s a new reality, and we’re going to have to get used to it.”

Grouped with Woods and Brooks Koepka for the first two rounds, Rory McIlroy was curious how it’d go this week. Over the past two months of this restart, he’s seen the fan-less experience for himself – how different it is, how his mind wanders, how he needs to create his own energy and momentum – and figured the eeriness would be magnified for Woods.

“Maybe he’s going to find it a little weird going out there and not having anyone,” McIlroy said, “especially with the amount of crowds that he has to deal with all the time he plays.”

But let’s be clear: Even without spectators, Woods still played in front of an audience Thursday. When he poured in a 10-footer for birdie to get his day started, a few hurrahs shot off in the distance. They came from the house to the right of the first green, from a family of five who was draped over the black wrought iron fence and saluting Woods’ first birdie on Tour in five months.

On 3, more cheers: A walking path winding through the neighborhood offered an area for viewing, so roughly 25 folks – including a shirtless runner with an American flag bandana – whooped it up for Woods’ kick-in birdie.

Other than that, there wasn’t much else to applaud, not on an afternoon when the rough was up and the wind gusted to 25 mph and only 24 players in this invitational field broke par. Woods joined that group on 18, after he bled his 14-footer down the hill and into the cup for a closing birdie.

Fewer than 50 people witnessed it on-site, with only a faint smattering of applause from someone, somewhere.

Afterward, more strangeness. Usually bombarded with questions from a large media contingent, Woods was questioned by only one pool reporter, as the rest of us looked on. After his 1-under 71 left him five shots back of Tony Finau, Woods said the “energy wasn’t the same without the fans.” But a few questions later, he said it didn’t affect him; that he still felt the “same eagerness, edginess, nervous starting out.”

Woods hasn’t experienced this in a while, either – playing in front of millions at home but maybe only a few dozen on-site. Such a surreal scene he could only smirk.