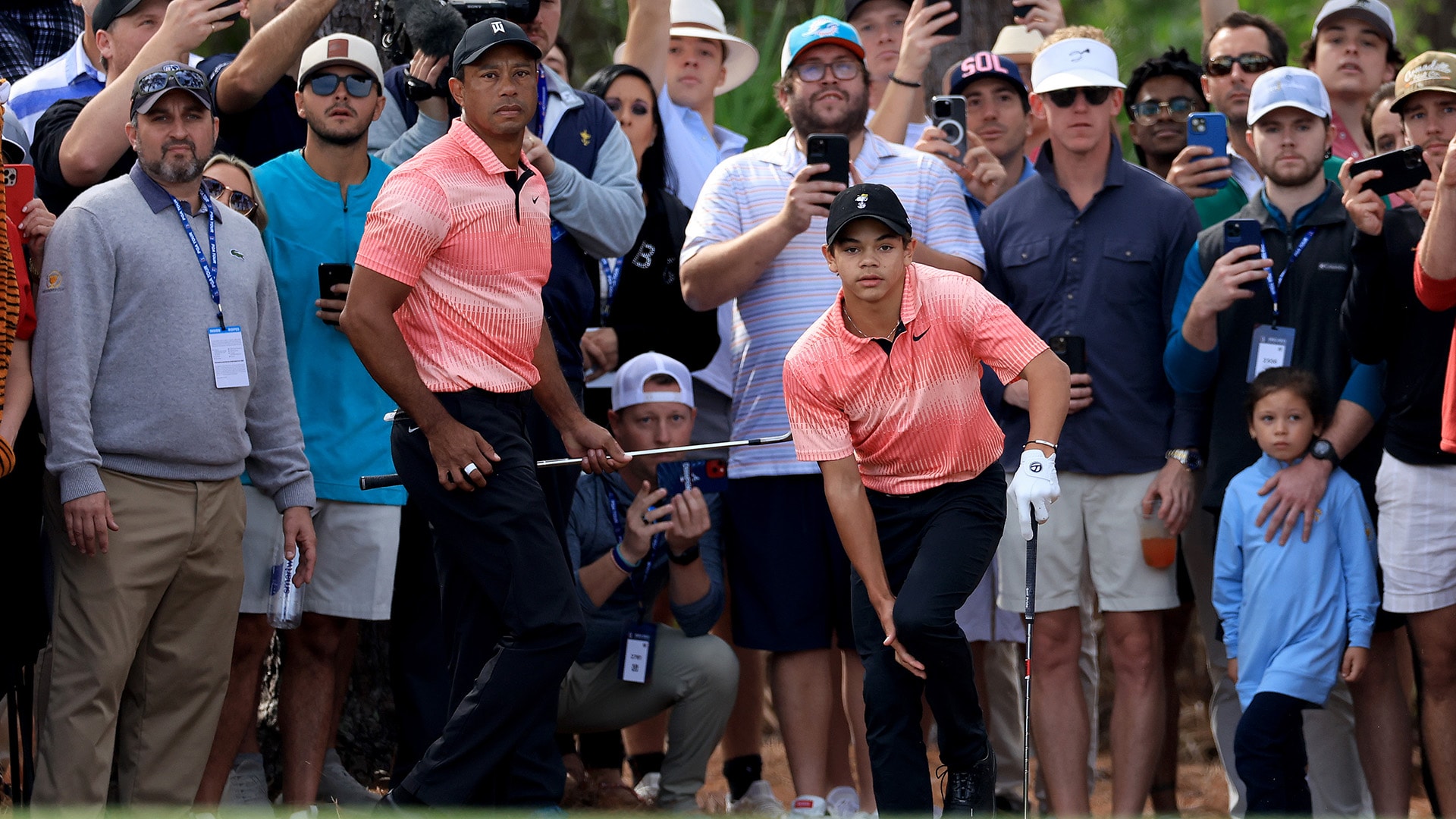 
ORLANDO, Fla. – Tiger Woods and his son, Charlie, shared a golf cart and another magical day at the PNC Championship.

Slowed by plantar fasciitis (Tiger) and an ailing ankle (Charlie), Team Woods rallied after a slow start for a 13-under 59 and a share of second place, just two shots behind the front-running tandem of Justin and Mike Thomas.

“We had a blast slaying it today. All day we were after it, and we didn’t get off to a great start, but we made some birdies, an eagle and got rolling and really got into it, which was awesome,” said Woods, who teamed with Charlie to finish runner-up at last year’s PNC Championship.

It was an impressive performance for a duo that Tiger dubbed “Team Ice Bath” because of the father and son’s various injuries. Tiger missed the Hero World Challenge earlier this month because of a painful bout with plantar fasciitis in his right foot and Charlie struggled with an injured left ankle that forced him to ride with his father in a golf cart and limited his ability to transfer his weight during his swing.

“On some shots it hurt a lot. Walking was tough,” Charlie said. “But it was all right. It wasn’t that bad.”

Tiger quickly added with a smile, “Hey, he got a cart, so it was all right.”

After playing their first three holes in 1 under, Tiger kick started the round with a long birdie putt at the fourth and a chip-in eagle at No. 5. The team made the turn at 8 under after a 35-footer for birdie from Tiger at No. 9 that prompted a fist pump from both father and son.

Despite both members of Team Woods banged up, Tiger and Charlie provided plenty of highlights in Saturday’s first round of the PNC Championship.

It was a textbook day for Tiger, who has contended all along that his swing remains solid even as his ability to walk golf courses has been limited by plantar fasciitis and his ongoing recovery from a car crash in early 2021.

“I can hit the golf ball. I just have a tougher time getting from Point A to Point B,” Tiger said. “Hopefully after starting Monday, we’ll kind of try and fix this thing and get it healed up.”

With his son limited by injury, Tiger played some of his best golf in what he admits has been a frustrating year to set up a showdown with Team Thomas, who won this event in 2020 and will be paired with Team Woods on Sunday.