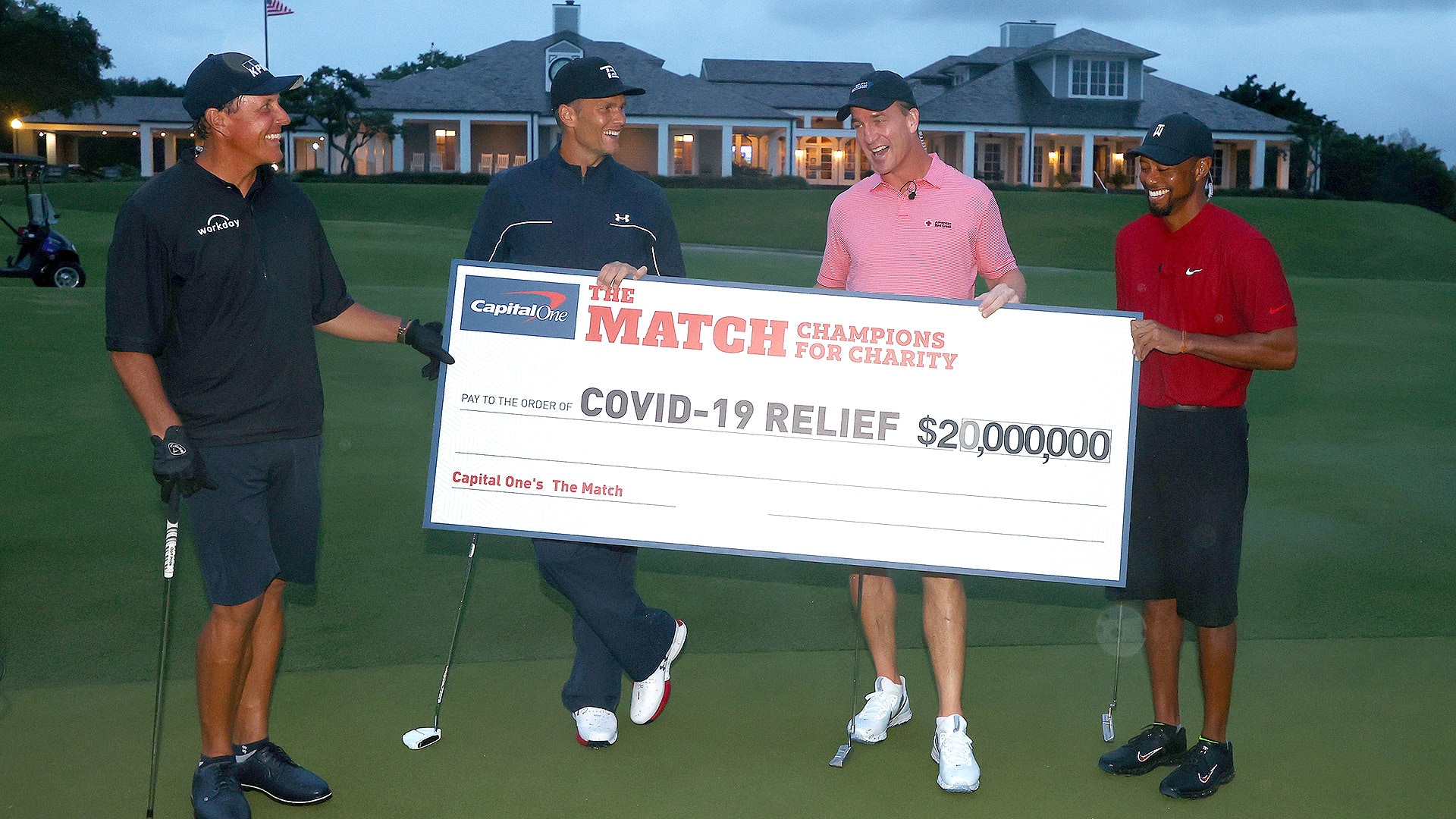 
Tiger Woods and Peyton Manning hung on to defeat Phil Mickelson and Tom Brady, 1 up, to win The Match: Champions for Charity.

In a match delayed by nearly an hour because of rain and played in sporadically wet conditions, Woods and Manning teamed to dominate the best-ball portion of the competition at Medalist Golf Club. They won three of the first six holes, including a lengthy birdie make from Manning on No. 4, to build an early advantage. Mickelson and Brady both struggled to get on track early, and the pair failed to win a hole on the front nine and faced a 3-down deficit.

The switch to modified alternate shot seemed to help, as Mickelson and Brady clawed back to trim the deficit to 1 down with three holes to go. But they could get no closer, giving Woods a little bit of revenge after Mickelson bested him in a $9 million match in 2018.

“We fought hard,” Mickelson said. “I was a little nervous, a little tight on the front nine. My man kept us in there, and the back nine he really shined. We made a run and came really close.”

While Woods and Mickelson were expected to shoulder much of the responsibility in the match, two of the best shots of the day came from the quarterbacks. Brady shocked the entire group when he holed a wedge shot from the fairway on the par-5 eighth hole for an improbable birdie, although the hole was ultimately halved.

Hole-by-hole recap of The Match: Champions for Charity with Tiger Woods and Peyton Manning vs. Phil Mickelson and Tom Brady.

Then on the par-3 16th, with both Mickelson and Brady in tight and threatening to potentially square the match, Manning stuffed his tee shot to 17 inches to preserve his team’s slim advantage.

“I know Tom and I were kind of comparing notes and feelings to each other,” Manning said. “To go behind the ropes in these guys’ world and kind of be in the arena with them, it was a really special experience. I was not comfortable the entire time, from the first tee all the way down here.”

Mickelson and Brady had one final chance to force extra holes, but Brady’s approach to the par-4 18th hole came up short of the green and Woods lagged a long birdie try to tap-in range to close out the match.

As with last week’s TaylorMade Driving Relief competition at nearby Seminole Golf Club, there was a significant charitable aspect to Sunday’s match with $20 million raised to benefit COVID-19 charities.

“It’s great, the fact that we all came together and we were able to raise $20 million for those that have been so severely affected,” Woods said. “This is our arena. This is what we do. We couldn’t imagine going out onto the field and doing what they do.”