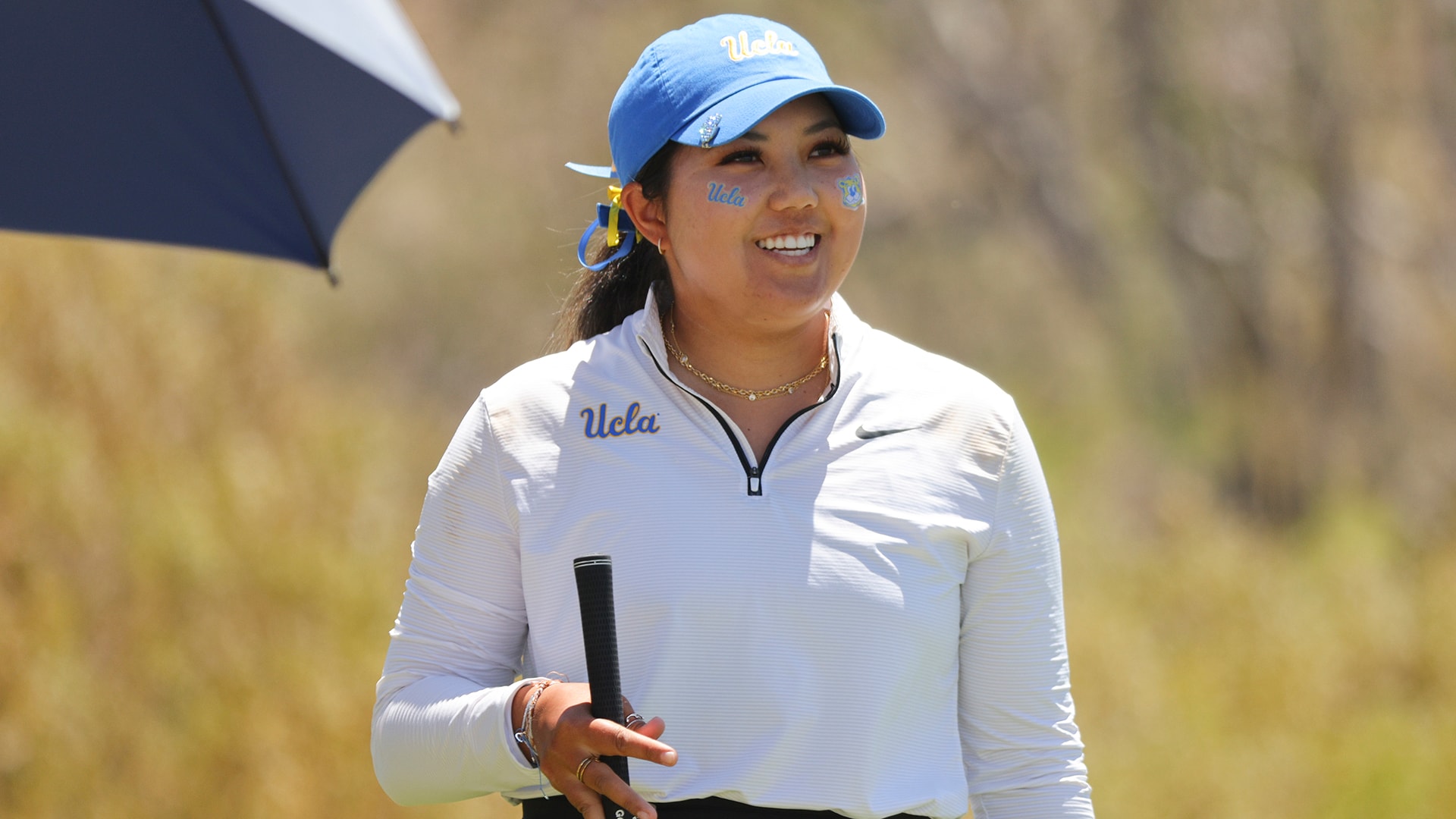 A seven-minute drive from the Akabane family home in Honolulu sits Diamond Head, a 300,000-year-old volcanic crater known for its hiking trails and spectacular views.

For Ty Akabane, she knows Le’ahi’s four-mile, out-and-back hike well, particularly the oceanside stretch that over the past couple years has been therapeutic for the college golfer.

“It’s where I feel most at home,” Akabane says. “I can be most transparent with myself here.”

Akabane reckons she comes up with her best ideas at Diamond Head. And contemplates her biggest decisions. After leaving UCLA in October and eventually entering the transfer portal earlier this month, Akabane used those walks to help plan her next steps.

The morning after Akabane’s name showed up in the portal, a text message from USC assistant coach Tiffany Joh popped up on Akabane’s phone.

On Thursday, Akabane made it official: The former Bruin was becoming a Trojan.

“Leaving UCLA was one of the hardest but best decisions I’ve had to make,” Akabane said. “Just because the decision for me to transfer felt selfish. By transferring schools, I was putting my needs first above the needs of the people I love. Leaving UCLA meant I would be giving up a full scholarship to help my parents out. It also meant leaving my teammates, coaches and all the great relationships I developed in the UCLA athletic and academic community.

“But I had to be honest with myself for my own physical and mental health, my priorities, my goals, my dreams, my future.”

There were lots of tears shed when Akabane broke the news to her coaches and teammates that she was requiring a change of scenery, how her environment was adversely affecting her. Each phone call, Akabane says, felt like “a stab to the heart.” But as she pushed through, she kept reminding herself of “my why.”

It likely stung her former team to see Akabane later jump to a crosstown rival. Surely, though, they understood the circumstances.

“Heal yourself first,” Akabane would often tell herself. “The rest will come later.”

This was a big step.

IT’S DEC. 8 AND AKABANE is finally ready to share her story. Some 400 words later, she’s finished penning what is easily the most vulnerable post she’s ever published to social media. She’s decided to transfer, but there’s more.

About halfway through, she reveals the heartbreaking reason why:

In the fall of 2019, I was roofied and sexually assaulted…

Talking about her trauma publicly was another steppingstone to allow her to close that chapter of her life and finally move on.

“It’s a memory that’s always going to be with me, but it’s also a memory that has made me strong and will only continue to make me stronger,” Akabane explains. “Being able to talk about it has been really healthy for me.”

For nearly a year after the assault, Akabane remained silent about what had happened. She didn’t even tell her parents, instead suppressing the pain while convincing herself that she was perfectly fine.

“I didn’t want to believe [what had happened],” Akabane said, “so I just forced it to the back of my mind and focused on putting all my energy into my priorities.”

Akabane capped that first fall with the Bruins by finishing runner-up at the Nanea Pac-12 Preview. She ended her freshman season by being named a WGCA All-American scholar. And the next summer, despite Akabane having played little golf because of the COVID-19 pandemic, she advanced to the Round of 16 at the U.S. Women’s Amateur.

But as the safety of summer was setting and it came time to return to Los Angeles for her sophomore season, Akabane couldn’t hide any longer.

Akabane describes it as a flood of almost every emotion – and all at one time. Overwhelmed, she decided to tell her parents and coaches everything.

Ultimately, everyone agreed that Akabane needed to stay home in Hawaii.

School and golf could wait.

Akabane took a medical redshirt as she began therapy. A big goal-oriented person, Akabane set a quick timeline: She planned to be back at UCLA in January, meaning she had some five months to “quickly heal and be normal again.” Plenty of time, she thought.

She saw a psychiatrist frequently, but when her target date arrived, she wasn’t ready. Frustration then set in.

“I would constantly ask myself the same questions over and over,” Akabane said. “What am I not doing? Why am I not seeing results? Will I ever feel normal again? I did everything she told me to, yet I wasn’t seeing any improvement.”

Akabane was confused. The type of person who needs to know the why, she couldn’t see the purpose in certain aspects of her treatment.

Plunging her face in a bowl of ice-cold water each morning.

Feeling her feet on the ground.

How is any of that stuff helping me?

“That was the wrong mentality to have,” Akabane says looking back. “I was going through the steps to change but had no change because I had a closed mindset, and that’s why it’s taken me a few years to come to terms with all of this.”

AKABANE DIDN’T RETURN TO UCLA until Fall 2021. In her first full season with the Bruins, she teed it up nine times, notching a T-4 finish at the Blessings Collegiate and capping her year with a T-21 showing at the NCAA Championship, where UCLA made match play before bowing out in the quarterfinals. In the classroom, she again earned Pac-12 academic distinction, and this fall, she competed twice, adding another T-4 performance.

Getting through a full year was big for Akabane, a step in the right direction – just not completely. Deep down, she knew she still wasn’t herself.

She had been taking the steps, but as she tried to “get through it,” she also developed some unhealthy coping mechanisms – disordered eating, compulsive exercise habits, poor sleep.

Only when she flew home in October did Akabane realize how bad a state she was in. When her parents picked her up from the airport, her mom immediately asked her daughter, “What happened?”

“I could see the concern in her face,” Akabane said.

The energetic girl who as a kid would race to the car line after school, just so she could get to the golf course sooner, was absent. In her place was someone hesitant, tired, and unhappy.

“I was so thankful to be able to complete a full year,” Akabane added, “but at the same time, I realized the damage I did to myself along the way. I was paying the price of my own health.”

Back on campus this past fall, Akabane didn’t event last the entire first quarter. Exempt for the East Lake Cup in mid-October, Akabane forgot to do her stats following a T-18 at Blessings, which meant she had to enter qualifying. With one round to play, Akabane notified Forsyth that she had reached a breaking point and needed to go back home.

She’s yet to step back on campus.

Shortly after Thanksgiving, it became clear that Akabane couldn’t go back to UCLA, so she called Forsyth to tell her.

“I know we did everything we could to help her and support her through this, and ultimately encouraged her to seek an environment where she could be at peace and thrive – even if that meant she had to leave UCLA,” Forsyth said. “Her happiness and peace is all any of us want for Ty.”

AKABANE IS CHEERY AND TALKATIVE as she does the interview for this story. Very personable, too. She even starts the phone call off by asking about my 7-month-old daughter and if I’m excited for her first Christmas.

“Being back home has been really productive for me,” Akabane exclaims. “I feel more like myself. I feel recharged.”

It’s abundantly clear that she’s excited for her new chapter at USC.

The feeling, of course, is mutual: USC head coach Justin Silverstein is thrilled to be adding Akabane, who he says brings not only a ton of college golf experience to a young team but also a “super, super top-end” ability to drive the golf ball. Currently No. 63 in Golfstat’s individual rankings, Akabane would rank second nationally behind only Amari Avery (No. 44) on a USC squad that finished the fall No. 21.

“I see her coming in and doing a lot for us,” Silverstein said. “Helping lead this group of young-ish college golfers but also playing at a high level in one of our top spots.”

The Trojans are hopeful that the NCAA will allow Akabane to compete right away when she arrives in January. Either way, she’ll have two years of eligibility remaining after this season.

Two years left to, in the words of the university’s motto, Fight on!

From a young age, Akabane’s mom has told her that everything, good or bad, happens for a reason. Not until this experience, though, has she truly connected with those words.

“It hasn’t been the easiest journey, but these are the cards that I have been dealt, and I wouldn’t change it for anything,” Akabane said. “It’s a good life, and I feel so blessed and grateful. I am the healthiest I have been in a long time. I have a super supportive family and coaches. I have a great new opportunity at USC where I can continue to learn and grow as a golfer, student and person.”

Akabane’s reconstruction doesn’t have a concrete stopping point. Much like Diamond Head, this healing process is a continuous loop.

But over time, the trek, with its many twists and turns, becomes easier.

And as Akabane continues to heal, she can’t wait to navigate the rest of this journey.