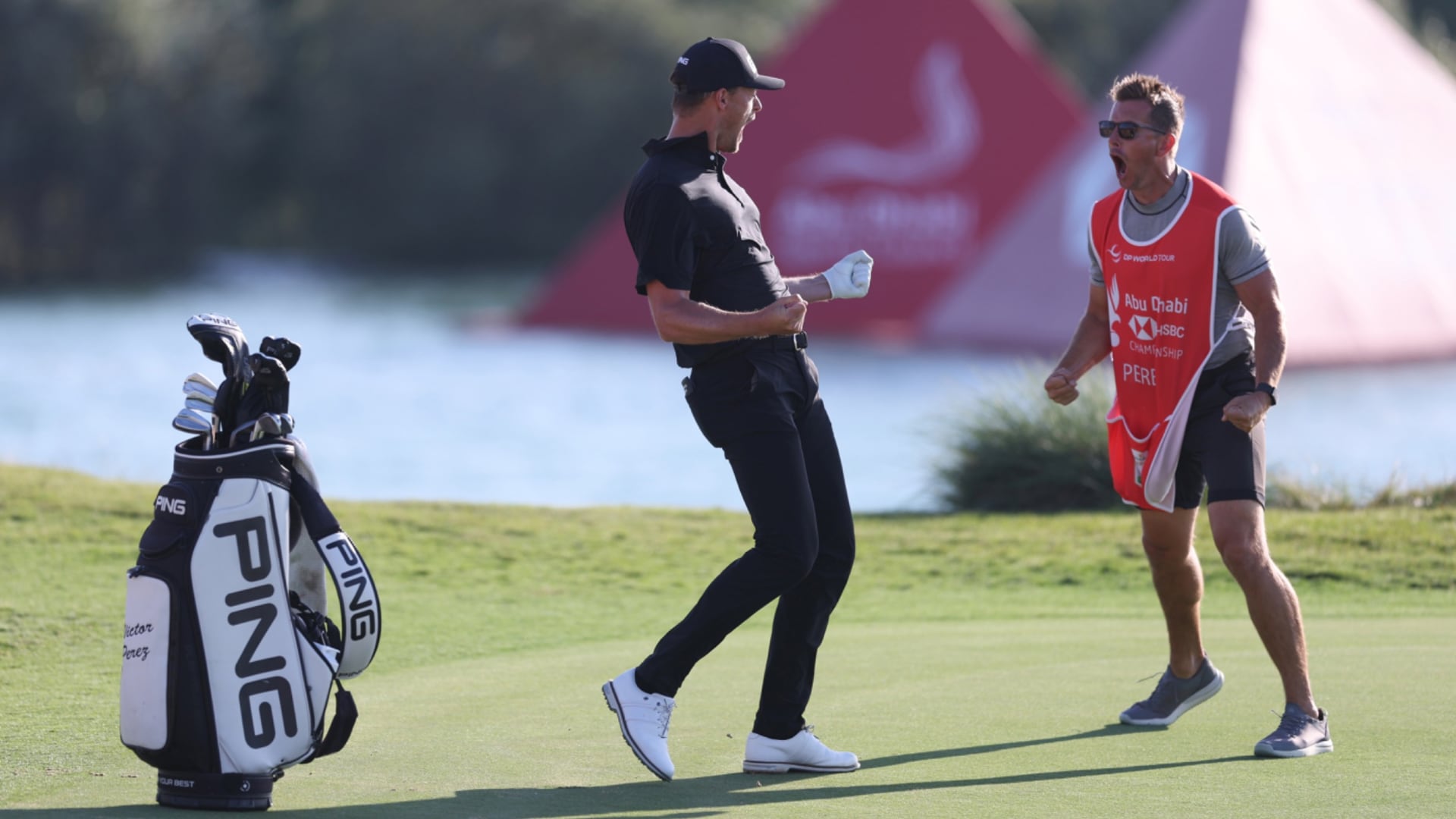 Perez span a bunker shot back into the hole for birdie at No. 17 and celebrated wildly on the way to shooting 6-under 66 for a one-stroke victory at the Abu Dhabi Championship on Sunday, earning him his third and easily biggest DP World Tour title.

“It was probably the greatest shot I’ve ever hit,” Perez said.

That wasn’t the end of the drama in a crazy finish at Yas Island Links.

Two strokes clear when teeing off at the par-5 18th, Perez drove into a fairway bunker, hit his second shot nearly into the water and two-putted for a bogey.

Min Woo Lee, playing in the group behind, needed an eagle at the last to force a playoff and his third shot raced just past the hole then rolled slowly back down the hill to settle within a foot of the cup. Only then could Perez, watching the television in the scorer’s hut, truly celebrate winning around $1.5 million at one of the tour’s top events.

It could be a life-changing victory for Perez, who climbed into second place in Europe’s Ryder Cup qualification standings. A captain’s pick for the contest with the United States outside Rome looks likely at the very least.

Perez was almost brought to tears when he was asked about what this victory would do for his career.

“There’s a lot of big things coming up, I’ve had a really good off-season, I’ve worked really hard …,” an emotional Perez said before stepping away and covering his face with his hands.

Perez finished on 18 under par for the tournament, with Sebastian Soderberg (67) and Lee (68) tied for second place. His previous wins on the tour came at the Dunhill Links Championship in 2019 and the Dutch Open in May last year.

Lee was in a share of the lead after the third round with major winners Shane Lowry and Francesco Molinari, but the latter two faded away in the back nine.

Lowry, in particular, struggled to a 76 after finishing bogey-bogey-triple bogey-bogey, and was in a tie for 28th. Molinari shot 71 and was tied fifth.

Perez birdied four of his first seven holes and twice held a two-shot lead early in the final round.

He did so again after playing the par-3 17th hole. Leading by one at that stage, Perez left his tee shot short and in a greenside bunker. His second shot went about 10 feet beyond the cup and span back into it, leading to Perez leaping out of the sand and chest-bumping his caddie.

“It came up maybe a little skinny, I’m not going to lie,” he said, “and it span back and I had the fortune of the ball going in.”

Perez spoke of more “fortune” down the 18th, when he fluffed his second shot and saw it roll down the hill and end up in thick rough near the water hazard.

“I would have had to drop in the rough, you’re playing 4, you catch a flyer and now the whole thing is back on the table,” he said.

That didn’t happen, though. Perez chipped out from the rough and hit a 7-iron under pressure pin-high from 150 yards.

Perez missed out on getting on Europe’s team for the Ryder Cup in 2021, having also been in a good position early in qualification. He is hoping to make amends now that he is top of the Race to Dubai standings and is about to rise into the top 60 in the world.

“It’s a position that I know — I’ve been in, basically, these shoes 2 1/2 years ago for Whistling Straits,” he said. “I’m delighted because it’s something hopefully I know, I can draw a little bit of experience from it and maybe use it going forward.”

Padraig Harrington, the 51-year-old Irishman and three-time major winner, was alone in fourth place — two shots behind Perez — after a closing 67.