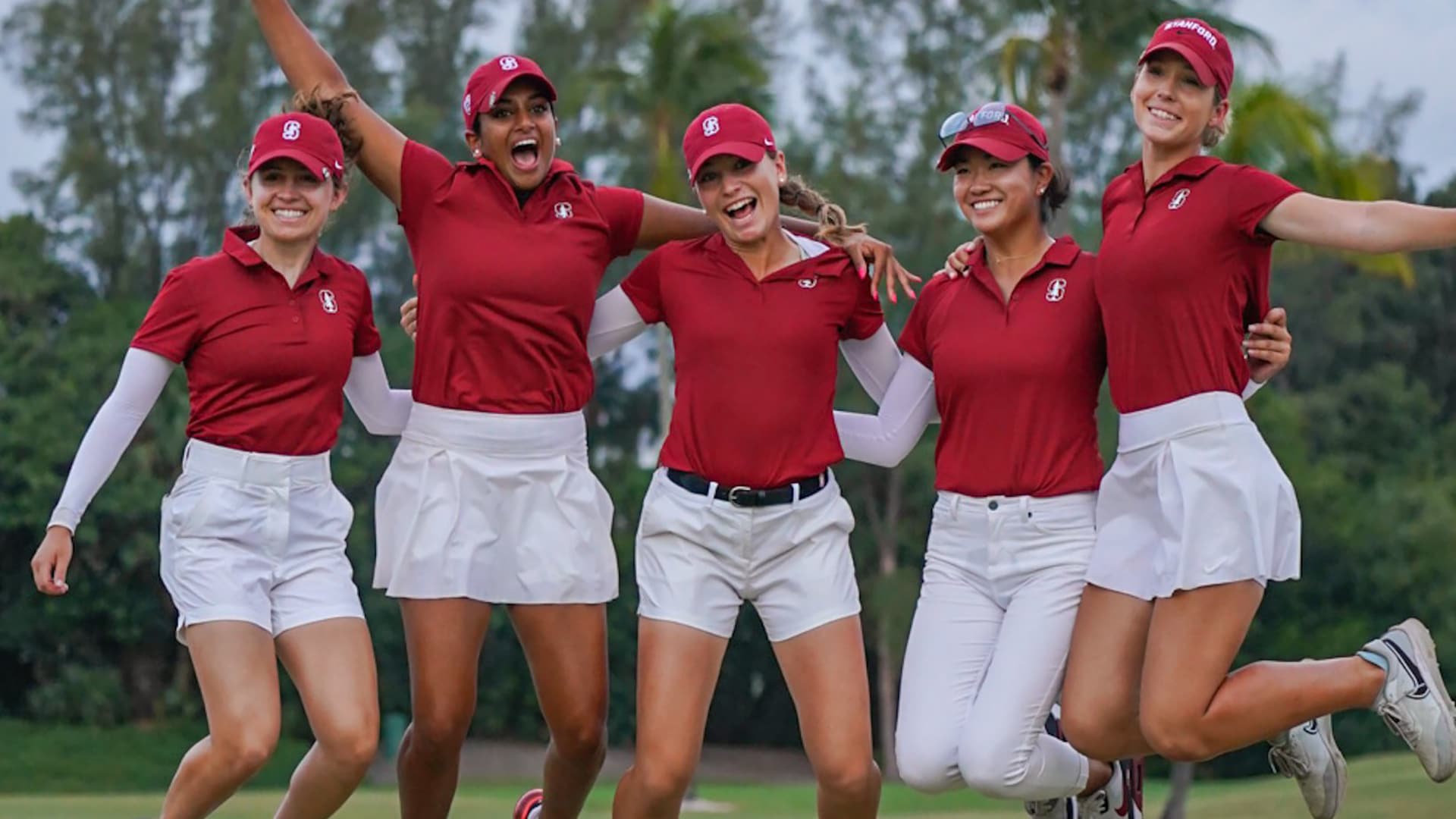 “Wake Forest is exceptional,” Walker said during this week’s Jackson T. Stephens Cup at Seminole Golf Club, where Stanford topped the Demon Deacons in the match-play final, but not before Wake proved itself a worthy adversary. “I think we could see them having one of those all-time seasons much like we did a year ago.”

Stanford is coming off a historic season in which the Cardinal won six times, including the NCAA Championship over Oregon, and freshman Rose Zhang notched four individual wins, most notably the NCAA individual title, while posting an NCAA-record 69.68 scoring average and earning the Annika Award.

And as Stanford works toward a title defense next May at Grayhawk, many consider this new squad to be better than last year’s team. Zhang is back, as is junior Rachel Heck, the NCAA champion and Annika winner as a freshman who has eight career college wins. The program also added freshman Megha Ganne to the fold, giving Walker four players ranked No. 37 or better in the World Amateur Golf Ranking.

But talk of an undefeated season, fervent last November after Stanford capped a perfect fall, has been quiet this time around. Perhaps, it’s because, as Walker pointed out before this season began, “stuff happens.” Of course, it could also be due to the Demons Deacons, who, at least on paper, stack up closer with the Cardinal than any other team in the country.

Wake Forest boasts three players in the top 23 of WAGR – Rachel Kuehn (10), Emilia Migliaccio (22) and Carolina Chacarra (23) – plus a two-time Curtis Cupper in Lauren Walsh (56). While Stanford won its fall opener at Pebble Beach, the Demon Deacons arrived at Seminole with back-to-back victories, at the prestigious Annika Intercollegiate and more recently the Mercedes-Benz Intercollegiate.

What happened over two days of stroke play at the oceanside Donald Ross gem, however, was arguably more inspiring for Wake faithful than either one of those fall victories. The Demon Deacons led wire-to-wire, shooting 19 under and clipping Stanford by six shots in the 54-hole stroke-play portion.

“These are the moments and tournaments we train for all year, so we are very pleased with the top seed heading into tomorrow,” Wake Forest head coach Kim Lewellen said on the eve of Wednesday’s title bout with the defending national champs. “Stanford is obviously an extremely talented team, and it’s an honor to play against them.”

Though the impressive performance didn’t come with a trophy, rankings-wise it was huge, and it helped Wake debut at No. 1 in the Golfstat rankings, which were released shortly before Lewellen and her team sat down for breakfast on Wednesday morning.

“Oh, we saw them,” Lewellen said later on the Seminole range when asked about the rankings.

Stanford, a close No. 2, surely did as well – or at least the Cardinal played like it.

Ganne set the early tone, jumping on Kuehn, the individual medalist, 3 up through four holes. The match ebbed and flowed mightily from there, as Kuehn got it back to 1 down after 11 holes, Ganne won each of the next two holes to rebuild her 3-up advantage, and Kuehn again clawed back, this time to tied with two holes to play. A bogey by Kuehn, though, on the iconic par-3 17th hole handed Ganne the late lead, which she converted into a point a hole later.

Heck and Zhang each lost their first holes, to Chacarra and Migliaccio, respectively. But Heck went on to win, 3 and 1, while Zhang dispatched her opponent, who is back playing college golf after taking last year off to work for Golf Channel, with a 3-and-2 win. Seay earned a 1-up victory over Walsh in the anchor match as Stanford won, 4-1.

Asked if there was added pressure for the Cardinal to reassert themselves as the team to beat in women’s college golf after Wake’s stroke-play triumph, Walker downplayed the narrative.

“You know, everyone says that [we’re the team the beat],” Walker said afterward. “That’s not what we see internally. And I think when you get caught up in the noise and what everyone says around you, that’s typically when things don’t shake out. And so, we work really hard [to avoid that] – we’re fortunate that we’re in that position that they can say that about us and these young women have earned that right, but at the same time, we work really hard at just staying focused on what we’re doing every day and not listening to the outside noise.”

Lewellen, meanwhile, was encouraged by her team’s showing at Seminole, though she added that her and the rest of the Demons Deacons would “learn from our mistakes.”

One notable blunder came Tuesday night during the pairings. With Wake the top seed, Lewellen had the option to put a player on the board first or defer. Typically, the tactical play is to defer to the opposing coach. But Lewellen went ahead and threw Kuehn up there in hopes to gather some early momentum.

That allowed Walker the chance to match with the player she believed to be most capable for taking down Wake’s emotional leader. That player was Ganne, and she did the job.

It’s unlikely Lewellen, if in a similar position next May at Grayhawk, would choose to not defer again. One could argue that Wake’s depth lends itself to victory regardless of the matchups, but when Stanford is on the opposing side, strategy is key.

Walker got the best possible matchups in every match, essentially matching her Nos. 1-5, in order, with Wake’s top five. If Lewellen had deferred, perhaps Walker throws a different player out first and that shakes up the entire paradigm.

Of course, this is nitpicking. Wake is elite, and it would be the shock of the decade if the Demon Deacons don’t buck their trend of missing 54-hole cuts at Grayhawk, something they’ve done in each of the past two seasons.

The more likely scenario is that Wake advances to NCAA match play, where at some point they’ll have to go through Stanford. There’s a good chance that’s in the final match, making Wednesday’s events an NCAA Championship preview.

And if you’re Stanford, you’re not No. 1 in the rankings, but in your mind, you’re the team the beat, whether you’ll say so or not.