↓ Skip to Main Content
Home › Blog › ‘We’re going to win’: Internationals leave Presidents Cup with a loss, but not defeated

‘We’re going to win’: Internationals leave Presidents Cup with a loss, but not defeated 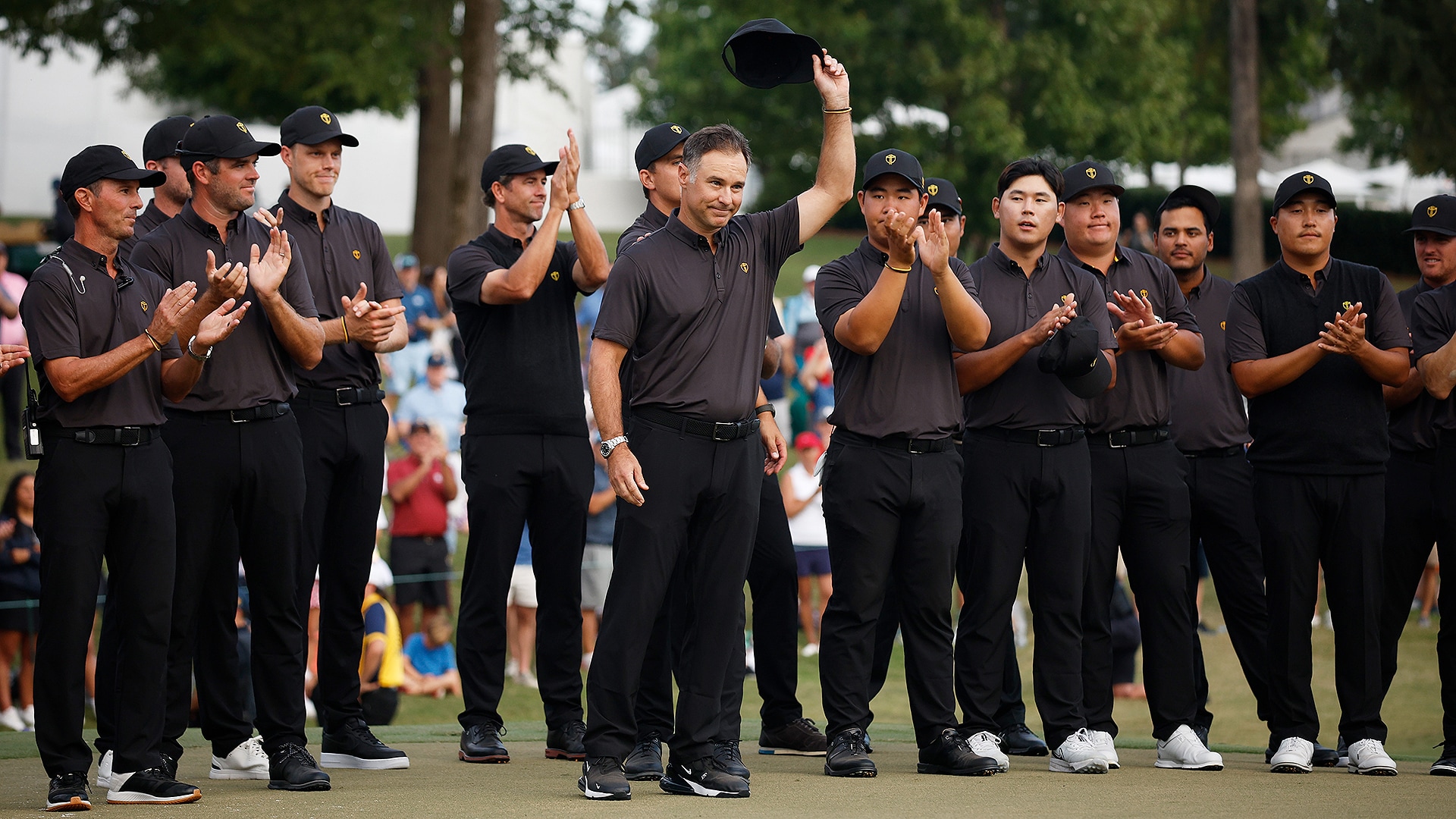 Their record in this event leaves little room for misinterpretation: They’re 1-12-1.

It’s been easy to dismiss the players as woefully overmatched, or the event as irrelevant. It’s been trendy to suggest that the Presidents Cup should be reimagined – maybe as a mixed event with the LPGA, perhaps in a death match with the LIV rebels.

On paper, at least, the final score at Quail Hollow – 17 1/2 to 12 1/2 – will do little to quell some of the criticism, but the outcome wasn’t reflective of the tense vibe on the ground. Just ask Justin Thomas, who stormed off the 18th green after a narrow singles loss. Or top-ranked Scottie Scheffler, who couldn’t defeat world No. 63 head-to-head and ended the week with just a half-point in four matches. Or Rookie of the Year Cameron Young, whose ice-cold putter left him with a sub-.500 record.

“I don’t know about you guys,” International captain Trevor Immelman said, “but at some point this afternoon, I thought there was still a chance.”

The Americans ultimately prevailed, but the weekend drama and spirit showed why players on both sides still value the biennial clash that, to this point, has been painfully one-sided.

“I wanted the American team to know that we’re going to fight,” Tom Kim said. “It’s not easy on American soil. It really isn’t. But we’re here to win, and we’re here to fight.”

That the Internationals even had an outside chance to win Sunday – when they entered the week as 6 ½-point underdogs – was a testament to their collective talent and grit.

Looking to build off an encouraging performance at Royal Melbourne, when they led across the first three days, Immelman and Co. waited an extra year to play because of COVID and then watched as more than half the team departed for LIV, some even after the qualifying deadline. Their absences were noticeable: Louis Oosthuizen was the rare International player with a winning record in match play; Joaquin Niemann would have formed a formidable partnership with close friends Carlos Ortiz and Mito Pereira; and lights-out putters Cameron Smith and Abe Ancer could have been useful when eight of the first 10 matches went to at least the 17th hole, with the Internationals winning just one of those points.

“You can’t really gauge it on this year,” U.S. captain Davis Love III said. “This is not a fair year.”

And yet, the Internationals won a two-session day on Saturday for the first time since 1998. At one point, they trailed 11-4, on the verge of getting boatraced. But by the end of the dramatic day, they had sliced the deficit to just four points, 11-7, and the Americans were reeling and, admittedly, “pissed off.” 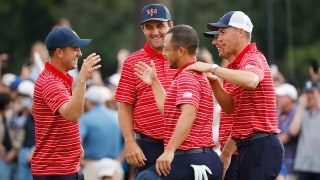 Here is a match-by-match recap of Sunday’s singles session at the 14th Presidents Cup, won by the U.S. for the 12th time.

“They were making a move toward having a chance,” Love said. “They believed for a while that they could win.”

And for about a half hour Sunday, the impossible seemed plausible. There was indeed a path for the Internationals to stage one of the greatest upsets in the history of the sport. Even against the third-strongest U.S. team in the world-ranking era (average rank: 11.5), they nearly split the singles session, falling 6 ½ to 5 ½.

The crowd filed out, and the American celebration was muted. More than anything, they appeared relieved that the juggernaut had finally fended off the pesky opponent.

“They’re going to be good,” Love said. “But it’s like any other sport: We’re on a roll, and they need a year of reorganizing and getting their players back. But if you go in their team room and ask, Do you guys just wanna quit? Do you wanna do something different? No. They want to win this thing. They don’t want change. We don’t want change.”

One simple tweak could make the event instantly more competitive – trim the number of daily team matches from five to four, lowering the overall points total to 28, just like the Ryder Cup – but it’s evident that the International squad is striding toward success. LIV remains an outstanding threat, of course, and it’s likely at least one member of this year’s squad will soon join the rival circuit. But a promising core remains intact: South Koreans Sungjae Im, Tom Kim and Si Woo Kim – all 27 or younger – combined for 7 ½ points. And though Canadians Corey Conners and Taylor Pendrith shockingly went 0-8 this week, they’ll almost certainly be on the team in two years at Royal Montreal.

“This was a very young team,” Adam Scott said, “but this was maybe the start of guys getting bred into our team. Trevor prepared them incredibly well; he did more than we’ve ever done before. And if I’m brutally honest, Trevor played everything great this week and we underperformed the first two days. We had a young team. There’s no excuses. We’re coming here to compete. But we had a young team, and I think we’re quick learners, and we got it.

“I hope they’ll reflect and be driven to make the next team, because if we can get some repeat offenders in here for the next few years, the International team looks really strong, and it’ll be a lot of fun for everybody watching this event to get more and more competitive.”

A few of Immelman’s lineup choices could be questioned, but he proved to be a rallying force for the perennial underdogs. In press conferences he spoke deliberately and confidently, almost as if his interviews were being patched directly into the team room. He heaped pressure on the heavily favored Americans but praise on his ascendant stars. He batted away questions about LIV, the team’s lack of autonomy, any potential format changes. He signaled that this group was here to stay.

That’s why it wasn’t surprising to see the normally mild-mannered South African lean into the mic late Sunday and vociferously defend his team. Unprompted, he ranted, “This team is no joke, and I’m sick and tired of it being spoken of as a joke. We love this event, and we love our team, and we cannot wait to run this back and have another shot.”

In a quiet moment later, Scott was asked whether he shared Immelman’s simmering frustration. After all, for the past two decades, the 42-year-old has slumped in a chair on a dais just like this one to reflect on how another cup passed without a victory. “We definitely feel the team is overlooked and always is underrated and shown less respect at times,” Scott said. “But there are some easy reasons for that: The Europeans dominated the U.S. for a lot of the last 20 years, and then the U.S. dominated us, so we seemed like the weakest team.”

The last two cups, though, have given Scott and the rest of the International side renewed hope. They’re united behind their logoed shield (which now appears on everything from shoes to folders to ribbons). They’re more organized and engaged in group discussions long before the team is even finalized. Following the Americans’ lead, they’ve modernized their approach to become more analytics driven. And their experienced and diverse assistant captains (from Australia, Korea, Colombia and Canada) have helped ease some of the cultural differences.

They believe – truly – that they’re closer than ever before. That they’ll eventually start evening the score.

“We have a system that we like and a plan and a strategy, and it feels like this was an important week for us to just lay a couple more bricks in this house that we’re trying to build,” Immelman said. “We’re here for the long run in this event. We’re going to win this event. So, we’ll keep building. We’ll keep fighting. And at some point, we’re going to win.”