With mom on bag, Frankie Capan rolls through three stages of KFT Q-School 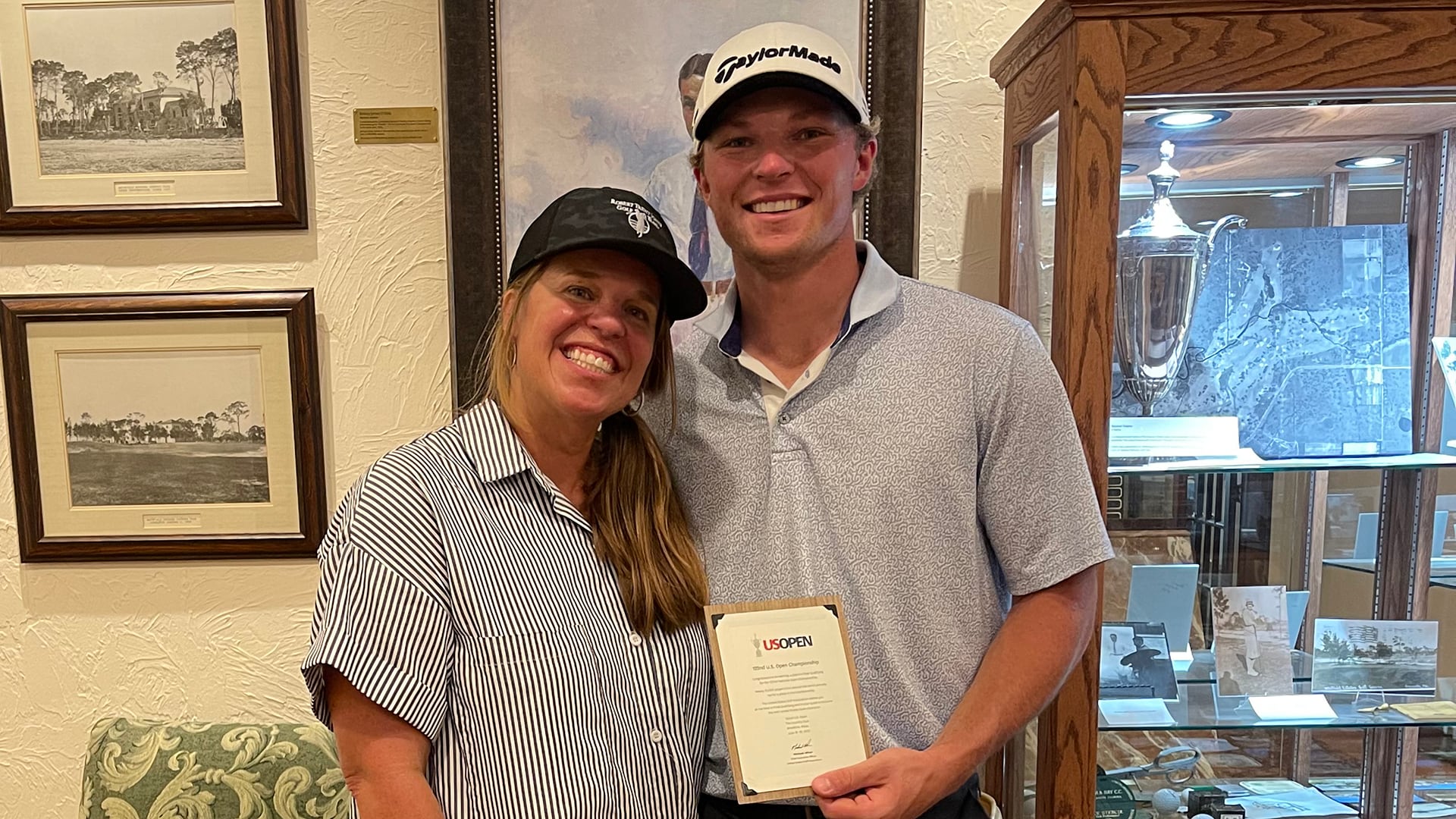 The 22-year-old North Oaks, Minnesota, native could’ve hired an experienced looper when he turned pro in late August, but so far, his mom, Charlynn, has done an exemplary job carrying the bag. In what was supposed to be a couple of spot starts, at a PGA Tour Canada qualifier in Brainerd, Minnesota, and Capan’s Korn Ferry Tour Q-School pre-qualifier in Prattville, Alabama, the mother-son combination has worked so well that Charlynn’s unofficial contract has been extended – Capan missed in a playoff at that Monday qualifier, his first event as a pro, before rattling off finishes of third, first and T-1 at the first three stages of Q-School to easily advance to next month’s final stage in Savannah, Georgia.

“After I won first stage by eight shots, I’m like, well, I can’t change now,” Capan told GolfChannel.com on Monday.

Capan isn’t surprised by the success. His mom might not get yardages or recommend clubs – “She’s out there making sure I’m eating well, drinking enough water, keeping me calm,” Capan says – but she has always been his good luck charm.

“We always seem to either win or come close to winning when she caddies for me,” Capan said.

There are many examples:

When he was in middle school, Capan won back-to-back U.S. Kids regional titles.

The summer after his freshman year at Alabama, he made match play at the Western Amateur and then beat Sahith Theegala in the first round.

This summer, Charlynn looped as her son got through U.S. Open local qualifying and won his U.S. Amateur qualifier.

And now, Capan has dominated Q-School, shooting 51 under in 11 rounds.

“We’ve had success together,” Capan said. “I didn’t think it would happen this quickly, but at the same time, as a golfer, you understand what you’re capable of doing, especially if you get in the right mindset and have the right people around and you’re going about your process in the way that is best for you.”

That hasn’t always been the case for Capan, who had an inconsistent college career, which began at Alabama and wrapped up with two seasons at Florida Gulf Coast. While he frequently shined during the summer months, the former top-10 recruit didn’t win in college and never was an All-American.

When he graduated in May, he knew he wasn’t quite ready to turn professional. While some of his close buddies flew up to Canada for the summer or tried their hand at Monday qualifiers and mini-tour events, Capan compiled a schedule full of elite amateur tournaments. “A fun last hurrah of sorts,” he says.

Capan played five of the seven Elite Amateur Series events, including the Northeast Amateur (T-10), North and South Amateur (Round of 32) and Western Amateur (T-22), plus one final U.S. Amateur, where he qualified for match play at Ridgewood before falling to Fred Biondi, a first-team All-American from Florida.

“We’re all on a different journey, different path, and I felt like that was the right path for me at the time,” Capan said. “I definitely didn’t play to my ability in college for most of the time, and I wanted to not necessarily get my confidence back but just start playing golf again how I love to play it, and this summer was a great jumpstart.”

Capan believes it could’ve been better, too. Case in point: At the Western, he was two shots inside the cut line to make the Round of 16 with two holes to play. But he lost his drive in the thick rough at the penultimate hole at Exmoor Country Club, lipped out a bogey putt and then horseshoed his next putt to make triple bogey. He’d go on to miss a playoff by one shot.

“I hadn’t been that fired up coming off a golf course in a while, if ever,” Capan said. “That definitely added some fuel to the fire moving on from that.”

The premature U.S. Amateur exit exacerbated that flame, especially considering Capan’s confidence was at an all-time high. “I felt like I could win,” he said.

Now playing for his job, it’s clear he still feels that way.

He shot 10 under and carded 14 birdies in 54 holes at pre-qualifying to safely advance by 13 shots. He then unlocked a new gear at first stage in Kannapolis, North Carolina, using 27 birdies and two eagles to fired 26 under and medal by eight shots.

Finishing first at first stage doesn’t come with a trophy or anything, but it still felt like a victory to Capan. “I didn’t want to take my foot off the pedal,” said Capan, whose final-round 66 was his worst score of the event. “I felt like the whole round I wanted to see how much I could win by. It was almost like I was competing against myself.”

When he arrived at second stage in Dothan, Alabama, the hot play had followed him. This time, Capan collected 22 birdies and a pair of eagles to post 15 under along with Auburn alum Trace Crowe, six shots above the cut line.

“I’ve always played well in qualifiers,” Capan said. “It was that mentality, like, I’m here, I owe it to myself to qualify. Now as a pro you’re spending all this money to travel and play in all these events, I need to do my job to the best of my ability to show up and play how I’m capable of playing and really hold myself to a higher standard.”

The job is not finished, either. While Capan has secured KFT membership by advancing to final stage, which will be played Nov. 4-7 at The Landings Club in Savannah, Georgia, he currently only has conditional status. He can earn guaranteed starts with one more strong week.

It’s rare for players to lock up starts at final stage after starting their journeys at pre-qualifying. Last year, eight players played in all four stages of KFT Q-School and just one, Tripp Kinney, earned guaranteed starts.

But Capan is prepared to be the exception.

Charlynn is ready, too.

She recently texted her son a photo of her hiking Pinnacle Peak in Scottsdale, Arizona, with a carry bag strapped to her back and filled with golf clubs and balls. Push carts aren’t permitted at final stage.

Capan had the perfect reply:

“I told her, ‘Mom, if we keep playing like this, I might need you to carry a really heavy bag.’”