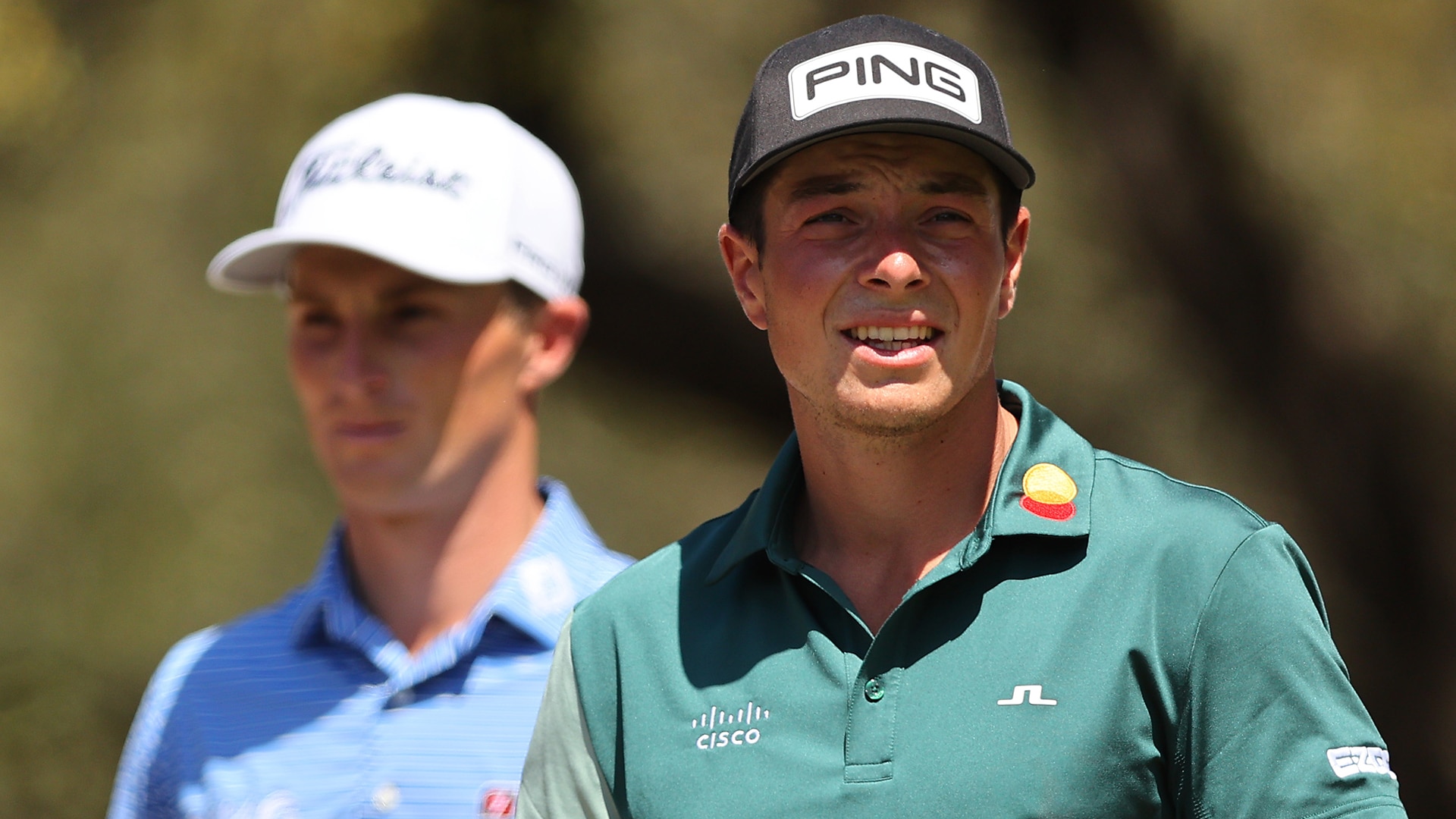 With 2023 finally here, it’s time to look at who to watch in men’s professional golf.

There are the players ready to win majors. Even more appear poised to capture PGA Tour titles. Expect a handful to make notable jumps into the first page of the Official World Golf Ranking.

So, who are they? Your guess is as good as mine, but here are some prime candidates:

Watch them win their first major

Viktor Hovland: It’s a very, very small sample size (four rounds), but Hovland is currently sixth on the PGA Tour in strokes gained around the green. Still, Congaree isn’t exactly a safe haven for bad chippers, and Hovland has been just that since turning pro, so even becoming a top-100 player around the greens could make Hovland the best player in the world. If that happens, best players in the world tend to do well in the world’s best tournaments, the majors. His T-4 at The Open last summer marked his first major top-10, so he’s not accustomed to contending in the big ones. But it’s also not like he hasn’t beaten tough fields.

Sungjae Im: He’s been hit or miss in majors so far in his career. And really his only hits have come at Augusta National. But he continues to be one of the best complete golfers in the world. Last season, he was 45th or better in the four strokes-gained categories while ranking sixth overall. While all the attention is on countryman Tom Kim this year, Im could be the South Korean player to win a major in 2023.

Will Zalatoris: No-brainer. Six top-10s in 10 career major appearances, including three runners-up. As long as he’s healthy, he should be a favorite at every major stop this year, especially Augusta National and Los Angeles Country Club, where he played on the victorious U.S. Walker Cup team in 2017.

Taylor Montgomery: The current frontrunner for Rookie of the Year thanks to top-15 finishes in six of seven fall starts. Has the potential to be a top-25 putter AND driver in terms of strokes gained. The big concern is his iron play, a facet of the game that serves as the strength for many of the game’s elite. But it’s hard to ignore the results, and the more Montgomery hangs around on Sundays, the better his chances of nabbing a trophy.

Davis Riley: His playoff loss to former Junior Ryder Cup teammate Sam Burns at the Valspar highlighted four top-5s a season ago. He also nearly gained in all four strokes-gained categories. While this fall has seen the Alabama product, much like the Tide’s football team, take a step back, the potential is still there. His iron play keeps inching toward elite and if he can get back to where he was last season off the tee and on the greens, he will break through for that first victory.

Sahith Theegala: He’s come super close to winning three times now – Phoenix, Travelers and most recently RSM. Those experiences, though stings in the moment, will only help Theegala the next opportunity he gets to close out a tournament. As strange as it sounds, Theegala wasn’t top 50 in any of the four strokes-gained categories last season – and he still made it to East Lake. The kid just knows how to ball, and he’s made some nice improvements with the putter in recent months. He’s a popular pick to win this year for a reason.

Watch them crack the OWGR’s top 50

Thomas Detry: The knock so far is that he’s yet to win on the PGA or DP World tours. But he’s come close quite a bit – six times to be exact, including most recently in Bermuda. He starts the year at No. 83 in the world, so he doesn’t have far to go. And now that he’s on the PGA Tour full-time, he’ll have plenty of chances to earn loads of points. He’s an all-around talent with the chance to earn top-75 status in all four strokes-gained categories; that’s the type of stuff top-50 players do.

Will Gordon: Very few players in the world drive the golf ball like Gordon. The Vanderbilt alum has been a top-40 driver in each of the past two seasons on the PGA Tour, and he’s poised to crack the top 20 this season. He struggles around the greens, but he’s the type of guy who can grind out solid finishes during bad weeks. Case in point: In seven starts this past fall, Gordon never finished worse than T-44 and had just two of 28 rounds higher than 73. His T-3 at Mayakoba is what happens when he gets some putts to drop. A couple of those and he’ll jump up from No. 131 in the world real quick.

Alex Smalley: I’ll admit I wasn’t super high on the former Walker Cupper coming out of Duke, but he’s done nothing but prove me wrong. As a PGA Tour rookie this fall, he closed strong – T-11, T-4, T-5. That’s helped him get to No. 92 in the OWGR. I expect his approach play to get a little better, which should allow him to notch a handful more top-10s as we get into the meat of the season.

Watch them crack the OWGR’s top 100

Chris Gotterup: I fully expect Gotterup to dominate most weeks on the Korn Ferry Tour. He doesn’t just mash the golf ball; in three PGA Tour starts this fall, he gained nearly a full shot combined around and on the greens. Since he’s not full-time the big tour, he’ll have a tougher time getting to double digits from No. 388 in the OWGR than a PGA Tour rookie would. But he’ll have a few opportunities to play up, and it wouldn’t be surprising at all to see him qualify and play well in a U.S. Open.

Davis Thompson: He climbed 864 spots in the world rankings this year, to No. 174, and it’s hard to imagine that trend slowing. A very smart and skilled driver of the golf ball, he does most all his damage tee to green. He’s been inconsistent as a pro, but his good is good, evidenced by a pair of top-12s in the fall. If everything goes right this year, Thompson’s comp is Cameron Young.

Kevin Yu: One of the nicest kids you’ll meet, and one of the nicest sounds you’ll hear off the clubface. He’s got the chops to be elite tee-to-green. If he figures out the putting, even if just for a few weeks, he could flirt with getting to East Lake. Seriously. I mean, he is No. 37 in FedExCup points after the fall. More probable, though, is going from No. 194 in the OWGR to inside the top 100.

Worth mentioning: Eugenio Chacarra. I’ve always been a big believer in Chacarra’s ability. Last year, he switched to the broomstick and took his game to the next level by improving his biggest weakness: his putting. He then won the LIV event in Bangkok. However, with LIV still not being able to award world-ranking points, it’s going to be difficult for Chacarra to make a run at the top 100 in the OWGR. That being said, don’t be shocked if he wins on the DP World Tour or another international tour in 2023.