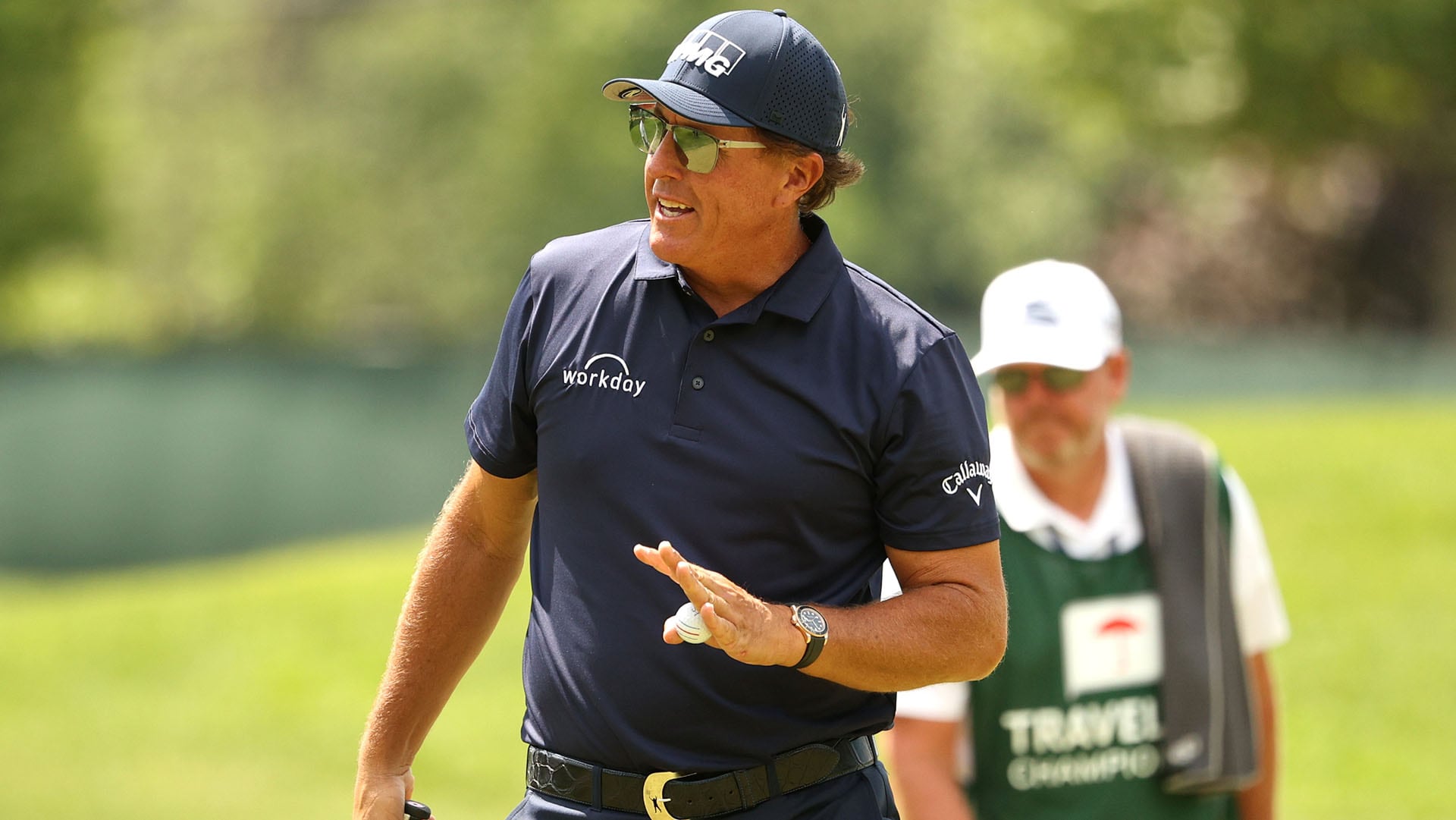 
Don’t tell the guy wearing the aviator sunglasses, doing the intermittent fasting, drinking the special coffee and looking thinner than he has since the 1990s that it’s time for the senior circuit.

Coming off rounds of 64-63, Mickelson heads into the weekend at the Travelers Championship the outright leader at 13 under par.

After an early bogey at the second, his only dropped shot Friday, he carded eight birdies, including five on his back nine, to take a one-shot advantage over Will Gordon and Mac Hughes through 36 holes. He nearly went up two when this wedge from 118 yards at the home hole danced around the flagstick, leading to a closing 3.

Mickelson is a two-time winner of the old Hartford Open, having gone back to back in 2001 and 2002, but he stayed out of Cromwell for 15 years before returning to TPC River Highlands last year, when rounds of 67-76 sent him packing early.

That performance a year ago was emblematic of the left-hander’s struggles over the last year-plus. After picking up his most recent win, the AT&T Pebble Beach Pro-Am in February of 2019, he fell into a prolonged slump that followed him in 2020. Coming into this week, Mickelson had missed five of his last six cuts, the outlier coming in the form of a solo third, once again at Pebble Beach.

In Cromwell, Mickelson finds himself not just playing the weekend, but also looking to become only the eighth man in PGA Tour history to capture a victory over the age of 50. He would join Craig Stadler, Fred Funk, John Barnum, James Barnes, Davis Love III, Art Wall and Sam Snead – and he could brag about being the youngest of the bunch. This is, after all, his first start since cracking the half-century mark last Tuesday.

A look back through the career of World Golf Hall of Fame member Phil Mickelson.

On the one hand, it’s been a lean stretch, this last year and change, for Mickelson. On the other, it was just two years ago that he was still in the midst of a five-year winless drought, dating back to his Open Championship triumph at Muirfield in 2013. Contrast that with where he is now. A win this weekend would be his third in as many years, following the 2018 WGC-Mexico Championship and 2019 AT&T.

Watching Mickelson has always been a bit of a roller coaster, and now he’s as erratic as ever. But every now and then, the five-major winner and World Golf Hall of Famer looks like – well – exactly that. Consider, for example, his ball striking. Mickelson is 202nd on Tour this season in strokes gained: tee to green at negative-.528. This week? He’s third in the field, having picked up 6.7 stokes.

Perhaps the difference is that he was a little less concerned with hitting bombs and hellacious seeds. Mickelson made clear after the round that he was in no way trying to keep up with playing partners Rory McIlroy and Bryson DeChambeau. It was a lesson he learned after a poor outing this year at Riviera, where he was paired with Brooks Koepka and Bubba Watson.

“I tried in LA to match it with Brooks and Bubba, and those guys are long, and I was trying to swing hard, and I ended up missing the cut,” he said. “I ended up not playing well, and I learned from that. …

“I made some strides in the sense that I didn’t try to go toe to toe with two of the longest guys in the game, Bryson and Rory. I ended up hitting some 3-woods on some of those holes because it fit my game better, and fortunately I made a couple of birdies.”

Phil Mickelson? Laying back? It only took him three decades on Tour.

And after all that time, he’s still out here putting up personal bests. This, in his 624th career start, is the first time Mickelson has ever opened with back-to-back rounds of 64 or better.

Inclement weather is expected Saturday afternoon in Connecticut, prompting tournament officials to bump up tee times. It’ll make for a quick turnaround for the 50-year-old leader, but that’s hardly a concern.

“You know, it’s probably a little bit difficult as you get older,” he said. “But when you’re playing well, you have that extra momentum, and it should be okay.”