Rolex Rankings movement: Who in women’s game rose, dropped in 2022? 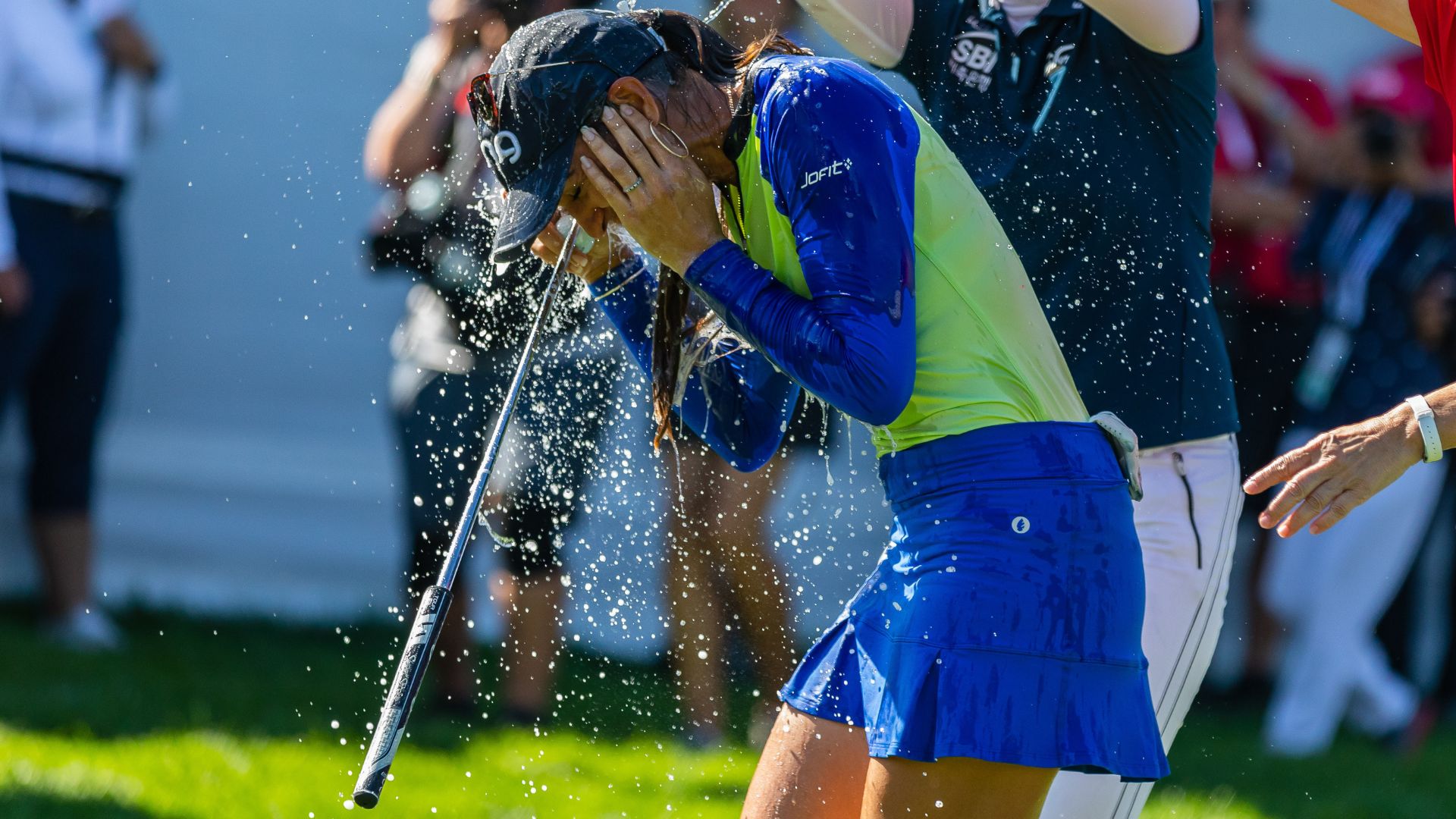 What a difference a year can make.

In a New York minute, one can go from the highest of highs to the lowest of lows — and vice versa.

Here are several notable who made big moves — up and down — in the Rolex Rankings this year:

The 23-year-old had a historic year and broke barriers. In June, she became the DP World Tour’s first female winner with a nine-shot rout at the Scandinavian Mixed. Meanwhile, she claimed four wins on the Ladies European Tour en route to capturing the circuit’s Order of Merit and Rookie of the Year award, following in the footsteps of fellow Swedes Annika Sörenstam and Anna Nordqvist. In six LPGA starts, Grant had four top-10s, however, none of them came on American soil due to U.S. travel restrictions related to her COVID-19 vaccination status.

The 19-year-old Thai fulfilled her lofty expectations, notching two LPGA wins and collecting 16 total top-10s (the most on tour) to become the second-youngest world No. 1 ever, though she’s dropped two spots since. Not to mention, Thitikul led the tour this year in birdies and sub par holes.

“I hadn’t thought that I would be No. 1 in the world that fast,” the 2022 LPGA Rookie of the Year said in November, “and I didn’t think I would achieve this in my first year on the LPGA as well. Overall, I’m feeling great. Feeling grateful that this has happened this year.”

After returning to the Epson Tour for two years, Vu earned her tour card for 2022 and looked like the player many thought she’d be when she helped the U.S. to Curtis Cup and Palmer Cup wins — recording eight top-10s and three top-3s this season.

“Everything happens for a reason, right? I hit rock bottom to learn how to play out here again,” Vu told LPGA.com in May.

The 29-year-old looks at the Bank of Hope Match-Play as the turning point of her year. She got in as the first alternate after a last-minute withdrawal and finished fifth, the first top-5 in her five-year LPGA career.

Near the season’s end, Dryburgh was barely inside the Rolex Ranking’s top 200 when she jokingly told her friends in Korea that she’ll mention them in her winner’s speech. Well, she’d get that opportunity just a week later, when she notched her maiden LPGA title at the Toto Japan Classic, becoming the first Scot to win on tour since 2011 and the 11th first-time winner of the season, tying the circuit’s record.

Earlier this year, the 28-year-old South Korean considered retirement while battling depression and a back injury. But after recommitting herself, Chun ended her four-year winless drought with major glory, winning the KMPG Women’s PGA at Congressional (her third career major victory). She nearly added a fourth at Muirfield’s AIG Women’s Open, forcing a playoff, but falling to Ashleigh Buhai on the fourth bonus hole.

It hasn’t been an easy journey for the 2017 U.S. Women’s Amateur winner. After winning that title, the former Longhorn earned her Epson Tour card, but collected roughly $28,000 in prize money after two seasons. She contemplated retirement and accepted an opportunity to work for Golf Channel at the 2020 U.S. Women’s Amateur. However, that experience helped her reinvigorate her game.

She secured an LPGA card for 2022 and though the 25-year-old recorded a mere top-10 as a rookie, it came against the game’s best with a runner-up at the Evian Championship.

“I want to cry tears of happiness,” Schubert said afterward.

Better late than never. After 157 LPGA starts, the 32-year-old, who won an NCAA title with Purdue in 2010 despite picking up golf at age 15, edged Nelly Korda at the CP Women’s Open for her maiden victory. In 18 starts this season prior to her win, the South African had just a single top-10.

“For a minute there, probably end of 2018, going through some stuff I was like, ‘Maybe this isn’t it,'” Reto said after her win. “Then I did find a good coach and we just sort of like really honed in on certain aspects of my game and sort of came together a little bit … Saw some good improvements in 2021, which I was really happy about. It sort of got me all excited again and able to keep going.

Eight years removed from her last victory, the 20-year LPGA veteran struggled this year, missing 14 cuts in 19 starts with her best finish a T-35. However, off the course, the 38-year-old American continues to be vocal about the importance of mental health, nearly a decade since first opening up about her bout with depression. And despite all Kim has accomplished on and off the course, she has no plans of slowing down.

“I want to win. I want to prove to myself that I can still be at the top of my game,” Kim told ESPN in September. “There’s no reason why I can’t have a third Renaissance. Technically, I already went through my second Renaissance when I won the Lorena Ochoa Invitational in 2014 and felt like I was back on top. I’m starting my third Renaissance, and I’m so excited by that.”

While many former prodigies such as Jennifer Kupcho and Thitikul made noise this year, Noh failed to take the next step. The 21-year-old Californian looked like she was finding her form in 2021 with a third-place finish at the Evian, sandwiched between two other top-10s. This year, though, she had a mere two top-10s in 28 starts. Her swing, however, passes the eye test, which makes her a prime breakout candidate for next season.

Many would have guessed that it wouldn’t take long for Saso to get back into the winner’s circle following her triumph at the 2021 U.S. Women’s Open, where she tied Inbee Park as the youngest winner in the championship’s history.

But winning is hard.

The 21-year-old Philipino started the year with consecutive top-10s, only to follow that with two more this season, which didn’t come until October.

The 2021 Rookie of the Year burst onto the scene last year, winning the ANA Inspiration in her first major start. However, the 23-year endured the growing pains of stardom in 2022.

In the middle of the summer, the Thai missed four straight cuts, and when she finally secured a weekend tee time in Scotland, Tavatanakit was brought to tears. That wasn’t necessarily a turning point, however. Tavatanakit closed out her season with the following results: three straight MCs, WD, 72, T-79, MC, T-59.

A year removed from notching two wins in seven months en route to earning a Solheim Cup nod, the 2011 NCAA Division I individual champion withdrew from April’s Lotte Championship and missed the rest of the season with a neck injury.

Two years removed from winning the AIG Women’s Open, the 30-year-old German started to feel shoulder irritation in May. She continued to play through the pain, telling Golfweek, “Every time I took the club away, and again after impact, I would feel a sharp pain through my shoulder.”

At this year’s Women’s Open, an MRI revealed Popov had supraspinatus tendinopathy. She would tee it up one more time this season at the CP Women’s Open, but after missing the cut, she shut it down for the rest of the year.

The seven-time major winner played a reduced schedule this season — a year after notching a victory and two runners-up among eight top-10s — teeing it up just 15 times with five missed cuts and three top-10s. Her last start came in August at the AIG Women’s Open.

She withdrew from the U.S. Women’s Open, opting to take several weeks off to work on her game; it was the first major she’d skipped since the 2017 Evian. This year was also the first year since 2009 that the 34-year-old South Korean didn’t record a single major top-10.

The former world No. 1’s drop in the world rankings may continue as in early December, Park announced she is expecting her first child.